If you’ve been driving in Brantford lately, you may have noticed a little red shed at the corner of King George and Tollgate Roads.

The structure is on the Dairy Queen property and has become a community hub for charitable causes.

“To bring their cause closer to the community, this is a very busy intersection, probably the busiest in the city,” said Ken Breau, Dairy Queen owner. “To have that visual exposure, especially when they’re here at the location, everybody stops to slow down and see what’s happening.”

But the red shed’s location has also proven to be a sticking point with city hall.

City staff have requested Breau to move the structure after a complaint.

The owner says he doesn’t charge anyone to use this shed and it’s in a great location because of the high traffic on King George road.

The location proved to be successful for Cindy Neily, who raised money for the Save the Evidence initiative in Six Nations, relating to the former Mohawk Institute Residential School.

“We had a lot of people ask if we can come to Brantford because we are located in Oshweken and we came here to do the fundraiser and we were sold out within two hours,” said Neily. 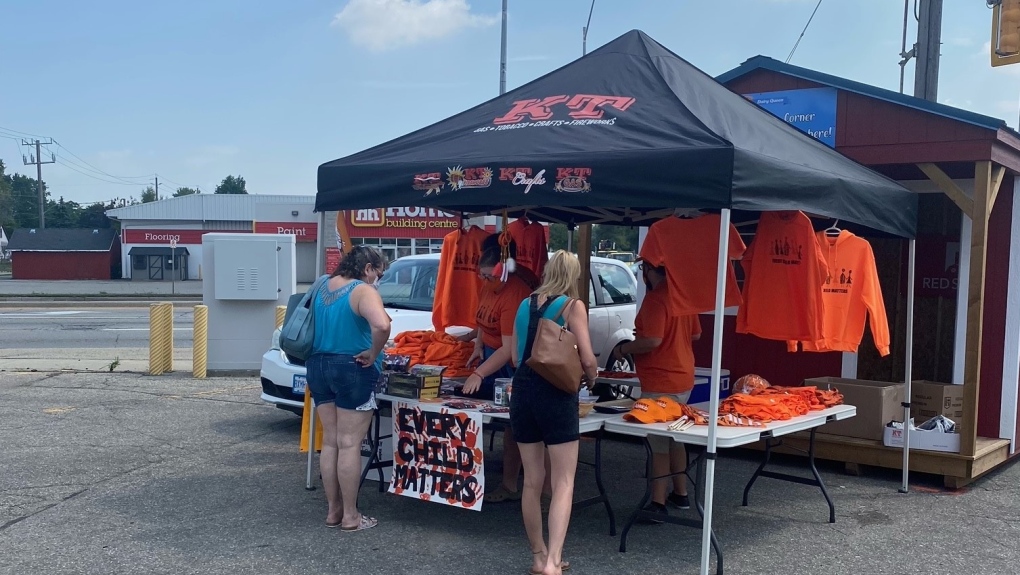 A little red shed in Brantford is being used as a hub for charitable causes. (Supplied by Cindy Neily)

But Neily doesn’t know if she can come back because the city doesn’t agree with the shed’s location.

“Following an investigation, City of Brantford bylaw officers informed the owner that the structure’s location is in contravention of the zoning bylaw and could either be relocated to an appropriate location that conforms to the bylaw and relevant design standards, or if the owner preferred to have the structure remain, he could apply for a minor variance,” Heather Carvalho, City of Brantford Communications, said in a statement.

Breau says they are trying to bring attention to charities in the city and if he puts the red shed in the back of the parking lot, nobody is going to know what’s going on.

The business owner said applying for a minor variance comes with a hefty price tag that he would rather donate to charity.

“The $2,500 is to file for a minor variance and it’s to basically ask for the city to formally evaluate,” he said.

While the city asked him to move the shed by Thursday, it still stands.

Breau says he wants the city to bring the issue to council next month.

EXCLUSIVE | Germany and Denmark repatriate women and children from Syria. Will Canada Follow?

An Access to Information request by CTV News shows that when Canada learned that Canadian women and children were being held in a Kurdish-run detention camp in Syria, the response was hesitant and minimal—and it appears little has changed, writes London Bureau Chief Paul Workman in an exclusive piece for CTVNews.ca.

Alberta's two major cities were voting for new mayors during municipal elections Monday after being led by Naheed Nenshi in Calgary and Don Iveson in Edmonton for multiple terms.

As polls in the Alberta municipal elections are set to close, voters in the province have also been given the chance to voice their opinions on federal equalization payments.

The recent death of Colin Powell, the first Black U.S. secretary of state, due to COVID-19 complications is a small warning, experts say, reinforcing that those of advanced age or with health complications are still at a greater risk than other vaccinated populations.