There was an unusual sight south of Guelph on Wednesday: a llama, spotted on the lam.

The llama caught the eye of some area residents, who saw the animal throughout the day in both the Arkell and Puslinch areas.

Rudy Gwinner took a picture of the loose llama around 2:30 p.m. in the area of Watson and Hume Roads. He said he noticed the animal on his drive home from work.

"I thought, is this a horse? It wasn't a horse because it wasn't that size," he said. "Then I realize, it's a llama!"

Gwinner says the llama, which looked about seven feet tall and nearly 400 lbs, was casually strolling between rural homes.

"I got out of my car and I stopped and it looked at me and I went to the other side of my car, but I thought I'll stay at my car because I know they can be possibly vicious because they protect sheep," he said. 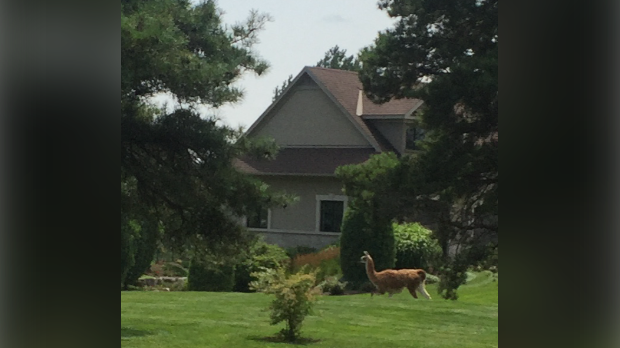 There was another sighting of the llama earlier Wednesday morning, just two kilometres down the road nearly Maltby Road East.

Tanya St. Michel said she saw the llama around 7 a.m. She stopped and tried to put a dog leash on the llama but couldn't get close enough.

"Since that road is very busy and hilly I was concerned for the safety of the llama and motorists who would not see it," St. Michel said.

She said she managed to push the llama off the road and into a nearby field in hopes it would be "safer for all."

The Guelph Humane Society said one of their volunteers also spotted the animal and called it into their emergency line.

The case is now in the hands of the Cambridge Humane Society, with officials saying officers searched the area but have not yet found the camel's cousin.

Down the road from where the llama was spotted, Penny Burton runs an alpaca sanctuary.

She says she's not aware of anyone local who owns llamas but warns if you do see it, go slow.

"I would suggest always approach the animal from the front as opposed to the back," Burton said.

She says if you're comfortable, shaking food or grain in a bowl will attract the llama and suggest trapping it in a fenced area until help arrives, which she hopes happens soon.

"They've actually been known to die from loneliness," Burton said.

Anyone who spots the llama is asked to call the Cambridge Humane Society.

A rescue operation underway for 39 people stuck underground at Vale's Totten Mine in Sudbury, Ont., has successfully retrieved 33 miners. A team of doctors is on-site and checking workers as they emerge from underground.

More than 80 per cent of eligible Canadians over the age of 12 have been fully vaccinated against COVID-19, according to CTV News' coronavirus vaccination tracker.

While acknowledging the inevitable advance of alternative energy sources and technology, OPEC said that oil will be dominate energy source for decades to come as crude prices reached three-year highs Tuesday.