A home near downtown Listowel was completely destroyed in a fire early Thursday morning.

“They were in the area and looking at the house. They saw flames coming from the window, and smoke,” said Const. Kees Wijnands.

Firefighters spent more than five hours working to contain the fire, which gutted the residence.

The roof and a back wall of the house were destroyed in the fire.

The lone male occupant of the house was able to escape uninjured, but in a bizarre twist, was taken into police custody on an unrelated matter.

Information on the cause of the fire was not immediately available, but investigators believe it started at the back of the house and then spread through the rest of the building.

The Office of the Fire Marshal has been called in to help investigate the fire, which required nearly 40 firefighters from three stations. 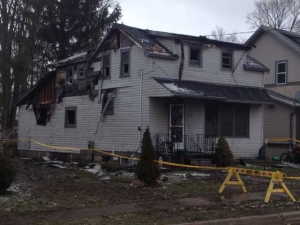 Scenes from the aftermath of the house fire.