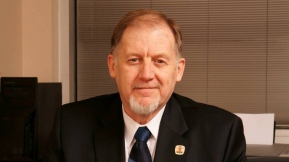 Les Armstrong in a photo from the Wilmot Township website.

Les Armstrong announced Friday that he will not be seeking a fourth term as mayor of Wilmot Township.

In a media release, he said he made the "difficult" decision after "some personal reflection."

"It has been my honour to have served as your elected official for 28 years, and it has been a privilege to be Wilmot's mayor for the last three consecutive terms," Armstrong said. "I am proud to have had the opportunity to work alongside so many talented and passionate individuals and volunteer groups that make Wilmot Township the wonderful community it is today."

As for what he'll do next, Armstrong had no immediate plans.

"I am unsure what lies ahead for me personally, but I will always look back on my time in office as one of the most rewarding aspects of my life," he said in the release. "I hold this community close to my heart and wish everyone the greatest success as we move forward."

Armstrong was elected councillor in 1985 and again in 1998. He held that role for three terms before being elected mayor in 2010.

'I would have died': Minister LeBlanc meets man behind life-saving stem cell transplant

A woman from Port aux Basques, N.L., is sharing her story of survival after she was swept under a Jeep and had to be rescued as post-tropical storm Fiona battered the small coastal town.

Jupiter will make its closest approach to Earth in 59 years on Monday, September 26, according to NASA.

Fiona, a category 4 hurricane turned post-tropical cyclone storm, barrelled through Atlantic Canada leaving behind flooded streets, wrecked homes and towns in darkness. CTVNews.ca looks at the data behind the destruction.