The Kitchener resident was honoured in a pre-game televised ceremony.

It’s a major milestone in a long journey that started in the small town of Drayton, Ont.

“I am proud to be from there,” Cherrey told CTV News. “It’s a small town but it certainly has a lot of character.” 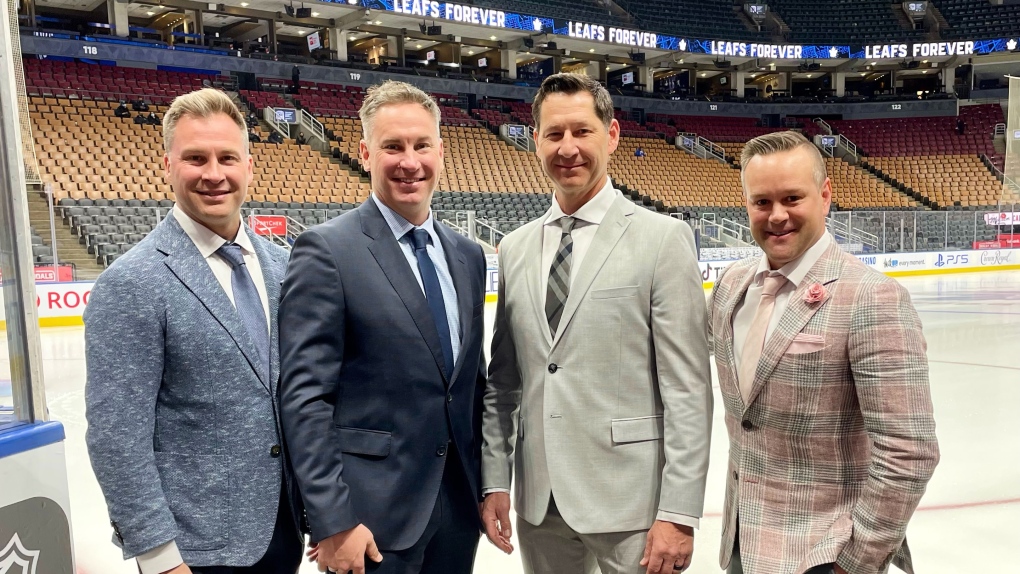 Cherrey said the league let him choose which game would be his 1,000th and which officiating colleagues he wanted to have by his side that night. Growing up just under two hours outside of Toronto, he chose the Leafs home game, so that his family and friends could easily attend.

Cherrey credits his success to his biggest fans, who were by his side during the ceremony Sunday evening.

“What was so special about this game was to have my kids and family out on the carpet,” he said.

His wife Christa and three children, Tyson, 18, Katelynne, 15, and Kaese, 9, joined him on the ice at the Scotiabank Arena, alongside his parents John and Linda Cherrey. 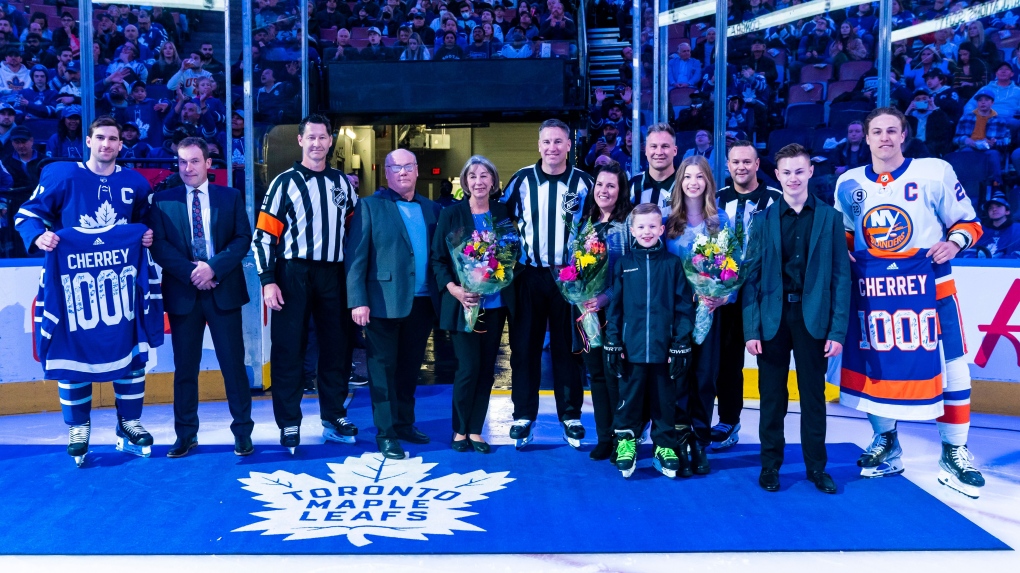 His hometown of Drayton continues to cheer him on as well.

Cherrey said an actual bus load of Drayton residents drove to Toronto together Sunday, to witness the celebration in person.

He was presented with two jerseys, one signed from each team. The number on the back of the jersey was 1,000.

Cherrey said he will be adding them to his “man cave” collection.

“The jerseys are now being framed and hung in the family basement,” he explained. 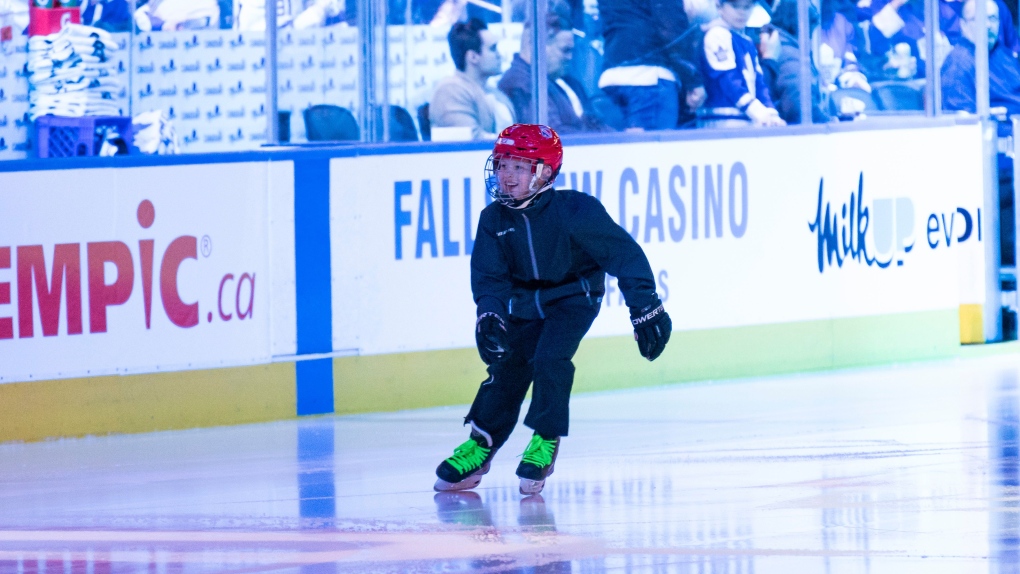 He also thanked the Maple Leafs organization for being so accommodating to his family, particularly because Cherrey’s youngest, Kaese, was able to lace up and skate around the NHL ice during the ceremony as the lights flashed.

Cherry said his nine-year-old was “smiling ear-to ear” and still constantly talks about the experience.

THE START OF A STORIED CAREER

“Just like any Canadian kid I had skates on the day I was born,” Cherry said with a shrug, explaining how his career in the game began.

Growing up, he played Junior B for the Listowel Cyclones, before moving on to the OHL, and winning the OHL Championship in 1993. 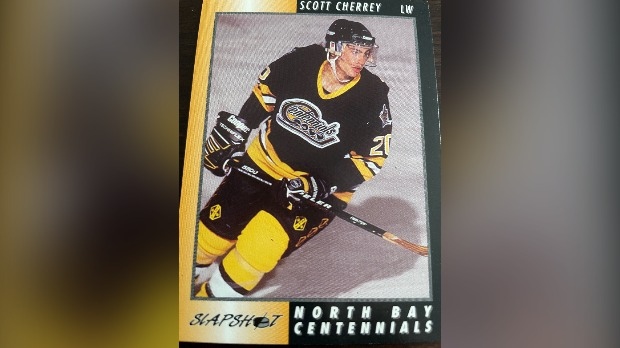 Scott Cherrey appears in a photo from early in his hockey career. (Submitted)

Cherrey was then drafted out of the OHL to the NHL in the second round by the Washington Capitals.

Though he didn’t end up playing any games in the big leagues, the next jersey he wore was for the University of New Brunswick where he earned yet another league championship.

Cherrey then moved to the University of Guelph, and eventually to the United States where he played in a mid-level professional league, the East Coast Hockey League, for the Mobile Mysticks in Alabama.

“At that point, the writing was on the wall with respect to it was probably time to move on and join the real world,” Cherrey said, adding he was about to get married at the time. 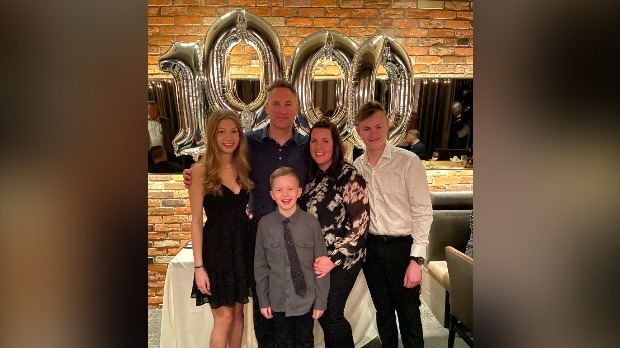 On a whim, during a golf game with his uncle who is also an NHL official, it was suggested to him that he switch his stick for a whistle as a way to stay in the game.

Cherrey said he wasn’t sold on the idea at first, but by the end of the golf round he figured he would give it a try.

His uncle told him the NHL was looking for officials who were former hockey players.

Cherrey attended a training camp for officials, which at the time took place at the University of Guelph campus, a spot already familiar to him.

“My goal when I started was to work a Rangers game on a Friday night,” Cherrey said. “I thought that would be the ultimate.”

Cherrey, who now lives in Kitchener said he worked his way up through the ranks, first officiating the OHL, then the AHL, and eventually getting hired by the NHL in 2007.

His first professional game in the black and white was ironically a Washington Capitals game, the same team who drafted him years ago. 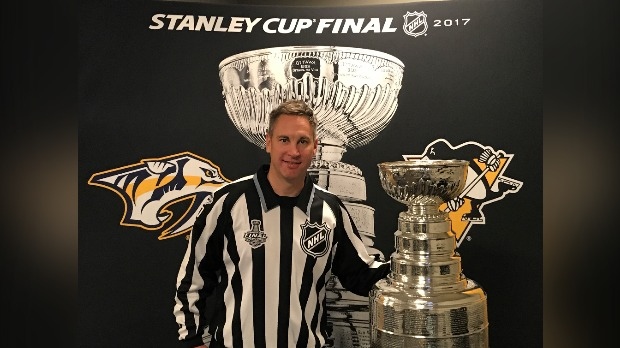 Scott Cherrey has served as an official in four Stanley Cup finals. (Submitted)

He said holding a whistle taught him, “a whole new perspective.”

He described how weird it was at first to have all the eyes on him after blowing a whistle.

When asked how he deals with the heckling that officials can often be victims of, he said “you just sort of focus on the game, inside the glass.”

Despite the accomplishment of 1,000 games in the NHL, Cherrey still maintains one of his best experiences was being able to officiate during a packed house on a Friday night at the Aud in Kitchener.