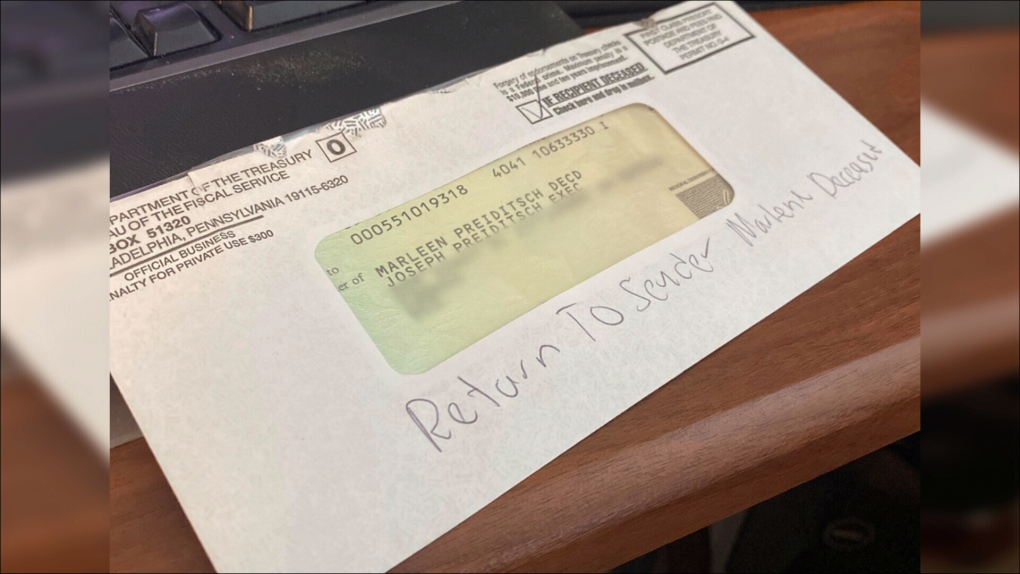 KITCHENER -- A Kitchener, Ont., man was surprised when he checked his mailbox on Monday to find a U.S. pandemic relief cheque addressed to his late mother.

Joe Preiditsch says his mother, Marlene Preiditsch, died in January of 2018 after living in Kitchener since 1980.

"She was a U.S. citizen, so as part of the estate process I had to do a lot of notifications to the U.S. to ensure that she'd no longer receive her social security benefits, and I had to do the tax return and the final tax return for her," he explains.

The U.S. government has sent millions of people one-time payments of US$1,200 as part of a US$2.2 trillion COVID-19 relief package.

Preiditsch says that when he received the one sent to his mom, he had a couple of reasons to raise his eyebrows.

For starters, it addressed the fact that she was deceased.

"It seemed quite strange that they would have with the suffix after my mom's name 'deceased' and then my name, 'executor,' on the envelope, for something that is only meant to help stimulate the economy right now in the U.S.," he says.

"It almost seems like they're sending them out without any real background checks or doing things without due diligence or process. You wouldn't expect the government to do that but, strange times we're in right now."

Preiditsch also says the envelope contained clear instructions that a deceased person should not receive the cheque.

"Right on the top of the envelope it said, 'If this person is deceased, please check off and return it,' so it kind of made me question, why did they send this to me?" he wonders.

So he taped the envelope closed and wrote "return to sender, Marlene deceased." That, he says, is the correct spelling of his mother's name – it was misspelled on the cheque.

"It's not really mine and it looks like it's a federal offence if I were to endorse that cheque, so I don't want to get in trouble and I don't want to remove my ability to go to the U.S.," he explains on the decision to send it back.

Preiditsch also says that, after speaking to a couple of his American relatives who live in Ohio, he was surprised to hear that his mother's stimulus cheque made it to Kitchener before theirs made it to them.

"You would think that domestic mail would make it there faster," he says.

CTV News Kitchener reached out to the Internal Revenue Service for comment but did not hear back.

Canadian companies are creating new jobs because of COVID-19

Pregnancy and the pandemic: 'Giving birth anywhere is a risk now'

Alleged COVID-19 scams lead to takedowns of more than 1,000 websites in Canada

Pharma chiefs say coronavirus vaccine could be ready this year, but challenges 'daunting'

Dysfunction in long-term care homes is taking a toll on workers, association says