Kitchener man charged after being struck by a pickup truck 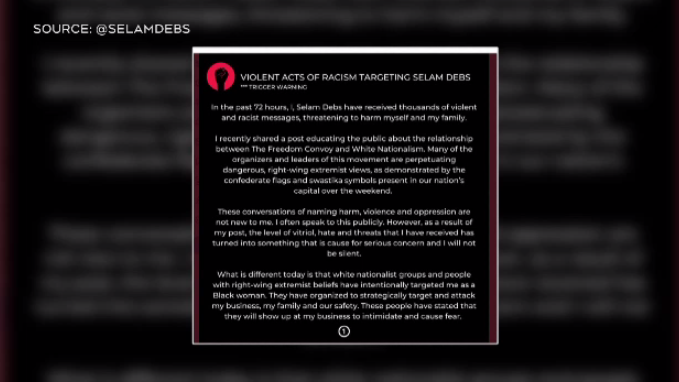 Local anti-racism educator and yoga studio owner Salem Debs (pictured) says she has been forced to temporarily close her business after becoming the target of violent and racist online harassment following a post about the ‘Freedom Convoy.’
Kitchener -

Waterloo Region police say a 52-year-old man has been charged after he was hit by a Ford pickup truck that was towing a large utility trailer Wednesday morning.

According to a media release, emergency crews were called to Lancaster Street West and Bridge Street East in Kitchener at approximately 11:40 a.m.

Officials said the man was attempting to cross Lancaster Street when he was hit, and was taken to hospital with non-life threatening injuries.

Officers determined that “as a result of the investigation, the pedestrian was charged with Pedestrian – Fail to Yield at Crossover.”

Police said this is an ongoing investigation and any witnesses are being asked to come forward.

The decision by police to wait before confronting the gunman at Robb Elementary School in Uvalde was a failure with catastrophic consequences, experts say. When it was all over 19 students and two teachers were dead.

Indigenous B.C. filmmaker says he was refused entry on Cannes red carpet for his moccasins

A Dene filmmaker based in Vancouver says he was "disappointed" and "close to tears" when security at the Cannes Film Festival blocked him from walking the red carpet while dressed in a pair of moccasins.

Justice Minister David Lametti is defending the federal government's authority to challenge provincial laws that they believe infringe on the rights of Canadians, after Quebec said Ottawa's reaction to Bills 21 and 96 lacked 'respect.'

Plane with 22 people on board missing in Nepal's mountains

A small airplane with 22 people on board flying on a popular tourist route was missing in Nepal's mountains on Sunday, an official said.

Around a hundred people gathered at noon Saturday at the empty Vancouver home where Chelsea Poorman’s remains were found late last month to show their support for her family's call for answers and justice.

Canada and Finland won semifinal games Saturday to set up a third straight gold-medal showdown between the teams at the IIHF world hockey championship.

Riot police fired tear gas and pepper spray at Liverpool supporters forced to endure lengthy waits to get into the Champions League final amid logistical chaos and an attempt by UEFA and French authorities to blame overcrowding at turnstiles on people trying to access the stadium with fake tickets on Saturday.

48K without power one week after deadly storm swept through Ontario, Quebec

One week after a severe wind and thunderstorm swept through Ontario and Quebec, just over 48,000 homes in the two provinces were still without power on Saturday.

Explainer: Where do hydro poles come from?

The devastating storm in southern Ontario and Quebec last weekend damaged thousands of hydro poles across the two provinces. CTVNews.ca gives a rundown of where utility companies get their hydro poles from, as well as the climate challenges in the grid infrastructure.