Victoria Park will look a little different this holiday season.

The Kitchener Pioneer Lions Club has decided to scale back its Christmas Fantasy light display, citing past vandalism and safety concerns.

“It’s a bit sad,” said one resident. “We are just coming out of the pandemic and it would be nice to go back to something that is more normal.”

Last year the display was damaged on at least three occasions, with vandals targeting light cords and the nativity scene.

“It’s pretty disappointing,” another resident told CTV News. “I go every year with friends and family. I have been going my whole life. I used to go when I was little. It’s sad and disappointing people would ruin it for everyone.” 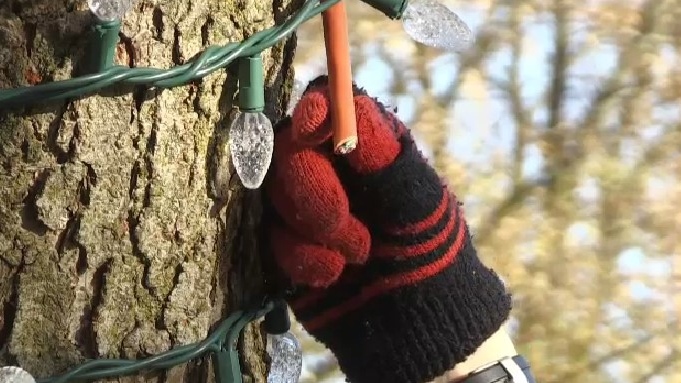 “With a recent break-in to the trailers a month ago, it has taken club members many days to volunteer their time to fix all the damage that was done,” the club said. “Like the instances of vandalism last year, a report has been filed with WRPS. Christmas Fantasy in Victoria Park is something the club takes much pride and enjoyment to set up for the public each year.”

The Kitchener Pioneer Lions Club also pointed to the encampment on Roos Island and the issues surrounding it as part of the reason for the move.

Instead of a light display in Victoria Park, volunteers will decorate Gaukel Street, near Kitchener City Hall, during the run of the Christkindl Market.

However Victoria Park won’t be in the dark this December.

“The city is going to augment the lighting and make sure Victoria Park is well lit with holiday lighting,” said Cory Bluhm, the executive director of economic development for the City of Kitchener. “It may be a little different from years before, but it will still be illuminated and people can still come down to Victoria Park.”

As for the encampment on Roos Island, the city said they are working with their partners to address the challenges and safety of everyone in the park.

Those living there are hoping to see some holiday cheer this year.

“It would be kind of silly not to bring some joy to people who can use a little light in their life,” said an encampment resident who goes by the name Tree Man.

The Kitchener Pioneer Lions Club is hoping the Christmas Fantasy display will return to Victoria Park in 2023.

Are magic mushroom stores the next pot shops?

Magic mushroom dispensaries are popping up in cities across Canada, with customers ranging from those looking for treatment for depression or PTSD to people wanting to 'micro-dose' a small amount of psilocybin, the hallucinogenic compound in magic mushrooms. But while the situation is in some ways reminiscent of when cannabis retailers set up shop before marijuana was legalized in 2018, Health Canada says there are no plans to legalize or decriminalize psilocybin products.

Quebec recommends booster only to vulnerable never infected with COVID-19

Quebec is changing its vaccine strategy: public health officials are now recommending booster shots only for vulnerable people who have never had COVID-19.