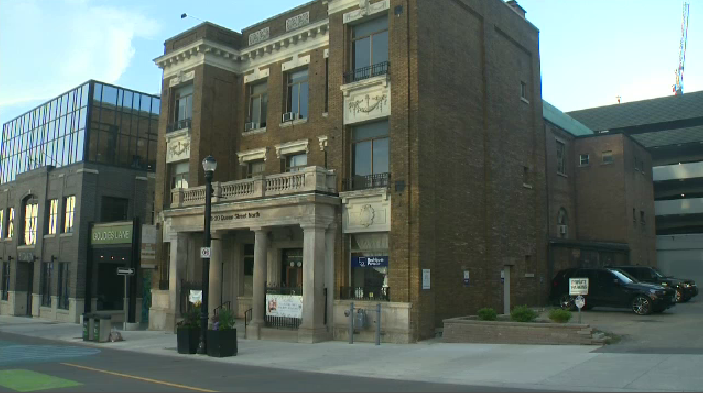 Kitchener councillors voted to designate the façade of the historic building at 20 Queen St. N. as heritage Monday night.

Council spent hours debating the value of the past and a plan for the future, with a 37-storey development proposal on the table from Momentum Developments.

The developer says it will include 238 units, 21 of which would meet the criteria for affordable housing, with a promise to create a community hub and incorporate heritage elements into the design.

Momentum Developments asked council not to designate the building under the Heritage Act, which is the opposite of what Heritage Kitchener asked councillors to do.

In the end, council compromised and decided to designate just the exterior of the building as heritage, with the idea of working with the developer on plans for interior elements.

“I think we have tried to find, with the amendment that is before us, a balance that allows the building to be protected, particularly in terms of the façade of the building,” said Kitchener mayor Berry Vrbanovic.

He also says the decision allows for new assets to be built, which will be beneficial to the community.

However, the decision was not unanimous with a 6-4 vote from councillors.

A neighbourhood meeting in Cambridge on Monday discussed a proposal for five apartment buildings along Water Street South by Churchill Park.

The meeting allowed people to address concerns, including density, traffic and environmental preservation. A public meeting on the project is expected in August.

Long-term care outbreaks are rising, and provinces have different strategies for keeping COVID-19 out

As the fourth wave continues across Canada and community spread climbs, outbreaks are also on the rise inside Canada’s long-term care homes, leading experts to stress the importance of staff being vaccinated — an issue which varies province to province.

Sask. health-care workers on the brink of being overwhelmed as COVID-19 ICU cases climb

Inside hospitals across Saskatchewan, which has one of the lowest vaccination rates in the country, health-care workers are reporting a worsening crisis, with record-breaking COVID-19 hospitalizations pushing the health-care system to the brink.

Ont. mother who camped outside premier's office will have son's autism file looked at:, minister

An Ontario mother, who had been holding a one-woman protest for the past week to try to get help with her son's autism care, will finally have her file looked at after a call from the social services minister.

Canadian fashion model Linda Evangelista says she's been left 'permanently deformed' from a cosmetic procedure that she had approximately five years ago.

The corporate entities of SNC-Lavalin Inc. and SNC-Lavalin International Inc., as well as two former senior executives of the Quebec-based firms have been charged with a series of fraud and forgery offences by the RCMP.

A source close to the family of Brian Laundrie says Gabby Petito's fiance, who is now the subject of a federal warrant, left his parents' Florida home last Tuesday without his cell phone and wallet.

Canada's costly election: Could $600M have been spent elsewhere?

After the most expensive election in Canadian history resulted in little change politically, many are asking whether it was worth the $610-million price tag and where else that money could have been spent.

Canada has now fully vaccinated 79.46 per cent of the country's eligible population.