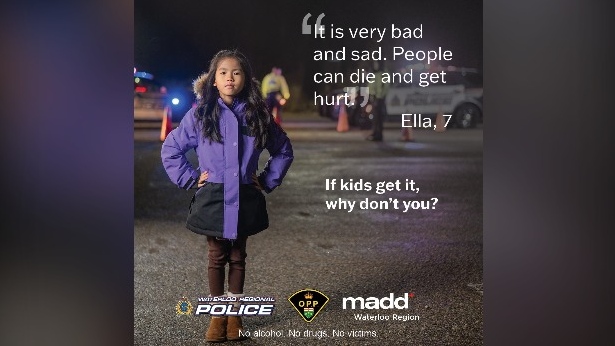 A kid's perspective is a focal point in the latest impaired driving campaign launched by the Waterloo Regional Police Service in partnership with Ontario Provincial Police and MADD Canada.

The campaign, called "If Kids Get it, Why Don't You?", features five children providing their insight on impaired driving with the goal of showing that even young children understand the dangers of driving impaired and adults should as well.

The ads will be promoted on social media for the WRPS, OPP and MADD Waterloo Region.

"Driving impaired, whether from alcohol or drugs, is illegal and dangerous," said WRPS Chief of Police Bryan Larkin in a press release. "This campaign hopes to make motorists think about the consequences of impaired driving on themselves, their loved ones, and the entire community. Along with developing educational campaigns, we will be conducting RIDE programs throughout the holiday season to ensure our roads are kept safe."

"Despite law enforcement efforts and the risk of crash, injury and death, Canadians are still driving impaired," said Scott Verhoeve, Vice President of MADD Waterloo Region. "In fact, every hour, an average of 10 impaired driving charges and short-term suspensions are laid in Canada. We hope that these advertisements will encourage people to plan a safe ride home before they consume drugs or alcohol, so that they won't make a risky decision that causes the injury or death of themselves or other innocent people."

Police urge motorists to make alternative plans to get home safely this holiday season, including:

Police ask anyone who sees or suspects an impaired driver to call 9-1-1 immediately.