'Just not safe at all': Concern for right of way where LRT meets crosswalk 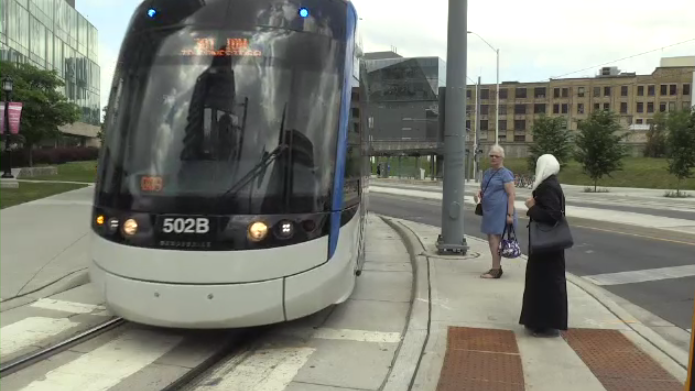 An ION vehicle passes over a crosswalk while pedestrians wait.

Some pedestrians are raising concerns over a Kitchener crosswalk that passes over the ION tracks.

People like Becky Thom, who crosses the intersection at King and Victoria several times a day, say the LRT doesn't stop to let people cross the road even when they have the right of way.

"You're looking at the crosswalk and just going to walk but then also having to be aware of the ION, and there's not proper signage to make pedestrians aware of what they should be looking for," she says.

Even though pedestrians have the walk symbol, the ION doesn't stop for them to finish crossing.

Other pedestrians say they've seen near-misses at the intersection before.

"It just happened the other day that I saw it, and it was like, 'oh my goodness, this is just not safe at all,'" recounts Sharyn Grabmann.

In a statement to CTV Kitchener, the region says it's aware of the issue.

"The configuration at King and Victoria has been brought to our attention. Staff will review the operations at this intersection," the statement says.

The region also says that pedestrians and cyclists should never step in front of a train, reminding commuters to always look both ways and be aware of their surroundings.

But some of the passersby that CTV spoke to on Thursday say changes need to be made at the crosswalk to make it safer for pedestrians, including flashing lights or signs that remind walkers to watch for the train.

Hey @GRT_ROW and @RegionWaterloo - this is a big problem. It sure looks like a pedestrian has a walk signal but the train just goes right through. I've seen numerous people get caught off guard by a train cutting in front of them. Someone is going to get hit. #watreg pic.twitter.com/0TeyrgA6y5