Travellers flying in and out of Toronto Pearson International Airport are being warned about longer-than-usual delays, and residents in Waterloo Region are sharing their experiences with CTV News.

Christina Marshall said she left for her vacation in the Dominican Republic before the issues began and didn't have any problems getting through security.

She had a much different experience Friday when she returned to Canada.

Marshall was told that a delay in customs meant passengers had to wait 45 minutes on their plane.

Once they were allowed to disembark, Marshall said it was "chaos" as hundreds of people tried to figure out what to do and where to go.

"You go through, you scan in your travel documents like your passport through the electronic system, and then you have no clue where to go. You've got to get into a lineup to go through the actual custom border security, but it's zig-zagging through, people are going through these machines. There's nobody guiding you, there's no formal line. And finally when you do get to a person, two hours later, you're obviously frustrated. People are getting upset, people are missing their rides, their connections, etc. All of this, it's just insane."

Dave and Kathryn Muir got back from their two-week trip to Europe on Monday night. They said they expected to be back in Kitchener-Waterloo by 9:30 p.m., but didn't get home until midnight.

The Muirs said their biggest inconvenience was waiting on the tarmac due to what they heard was a "customs delay."

"Two hours on the plane and then they started letting people out in groups of 50," said Dave Muir.

"You just want to get up and stretch your legs," added Kathryn Muir. "It was the end of our vacation. We had already been on the plane for more than seven hours. We were tired."

On Tuesday, a spokesperson for The Greater Toronto Airport authority warned travellers to arrive early for their flight and be prepared with all their documentation for security screening.

The Canadian Air Transport Security Authority (CATSA) told CTV News on Monday that they were experiencing issues with staffing.

Paul Herriot and his wife, who live in Kitchener, flew from Las Vegas to Toronto on Friday night. They noticed there weren’t as many staff members and the line at customs seemed unorganized.

"It was quite busy," said Herriot. "The lineup was snaking its way through the entire room right next to the kiosks where people were checking out." 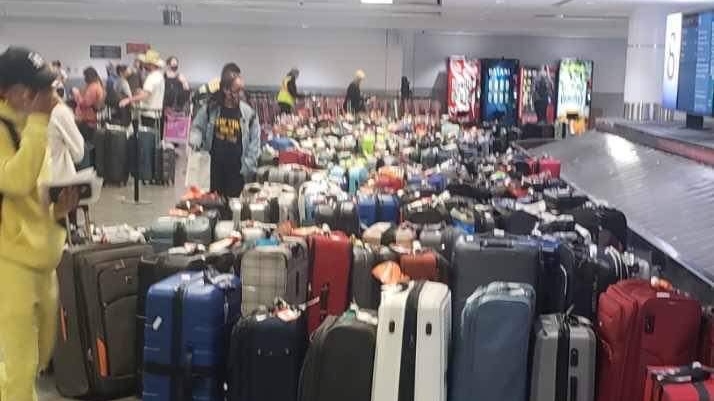 A local travel agent with Vision Travel said their office has been busy.

"Pent up demand is hitting us now and we're swamped," said Sandy Willett.

She suggests travellers prepare all documents beforehand to help speed up the process for everyone.

"All the documentation has to be checked. Some people don’t have the right documentation and they have to try and fill things out at the airport. That should’ve been done before they got there."

MORE: Delays continue at Toronto Pearson. This is how early you should arrive for your flight

While delays were also reported Tuesday morning, by the afternoon CATSA's website showed a wait time of less than 10 minutes.

Russia strikes Kyiv as troops consolidate gains in the east