The past few weeks have been much drier than normal, creating challenges for those who grow food.

At Herrle’s in St. Agatha, they are relying on irrigation systems using water from their ponds and wells to keep their 200 acres of crops watered.

“The corn loves the water, the peas, the beans need the water, otherwise they taste dry because they’re really stressed out,” says Trevor Herrle-Braun.

He is preparing to plant more peas and beans in the coming weeks but says the dry soil presents challenges.

“For our last two plantings, I’ve had the planter as deep as I can go, and I still can’t hit moisture, so that’s three to four inches deep," says Herrle-Braun. "We don’t have any moisture in the soil, so we’re needing to irrigate those crops. Those plantings now just to get enough moisture down to the seeds in order to get it to germinate.” 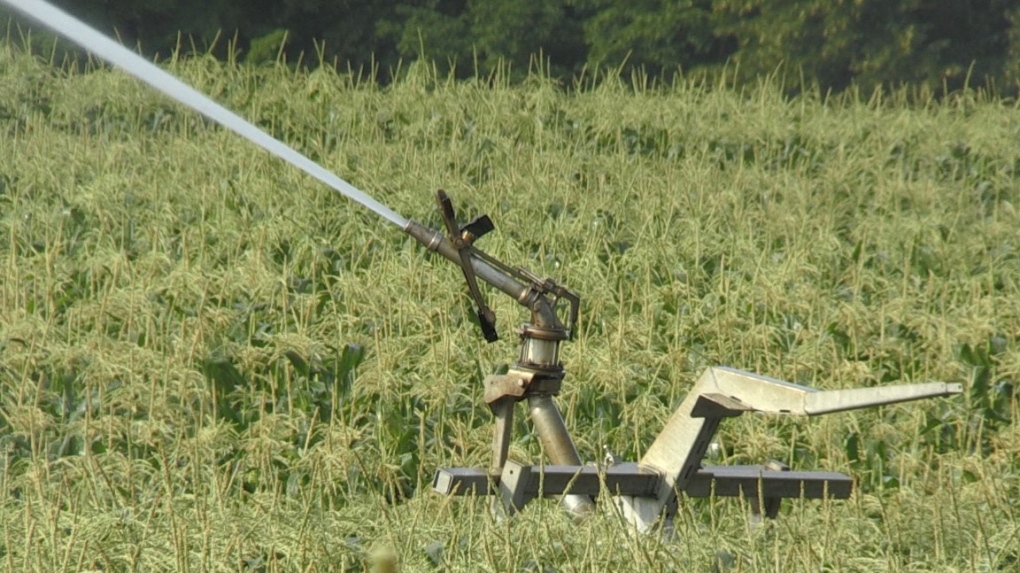 Some farmers are running their irrigation systems through the night. (Krista Simpson/ CTV News Kitchener)

“Really it’s been since the middle part of June. It’s been very dry and not just for the Kitchener-Waterloo area but also for a good portion of Southwestern Ontario in general,” says Geoff Coulson, a warning preparedness meteorologist with Environment Canada.

Environment Canada data shows 48.6 millimetres of rain fell in the area in June, most of it during the first half of the month. The long-term average rainfall for the month is 82.4 mm.

So far in July, 4 mm of rain has fallen, and while there is still half of the month to go, that’s well off the average of 98.6 mm.

“It is looking like July will end up notably drier than normal as well,” says Coulson.

Currently, no major rainfall is expected in the long-term forecast.

“For the next week to ten days we still are expecting to see some shower activity on a few days here and there but not the widespread activity that farmers are likely looking for,” says Coulson.

In the meantime, at Herrle-Braun’s they’re often irrigating well into the night.

“It’s a lot of sleepless nights for those who are looking after moving the reels and the sprinklers and that from farm to farm and starting up the pumps and that,” says Herrle-Braun.

Coulson says the weather can change quickly at this time of year and suggests farmers focus on what’s expected in the shorter term.

“It really is going to be more watching that forecast in the one to two-day timeframe as opposed to looking out seven to ten days to try to get a sense of what we’re looking at,” says Coulson.

“We’d take a couple inches [of rain] right now, over the night, over a long period of time so it has time to soak in,” says Herrle-Braun.

Following an hour and a half delay, the United Conservative Party is releasing the results of its Thursday leadership vote.