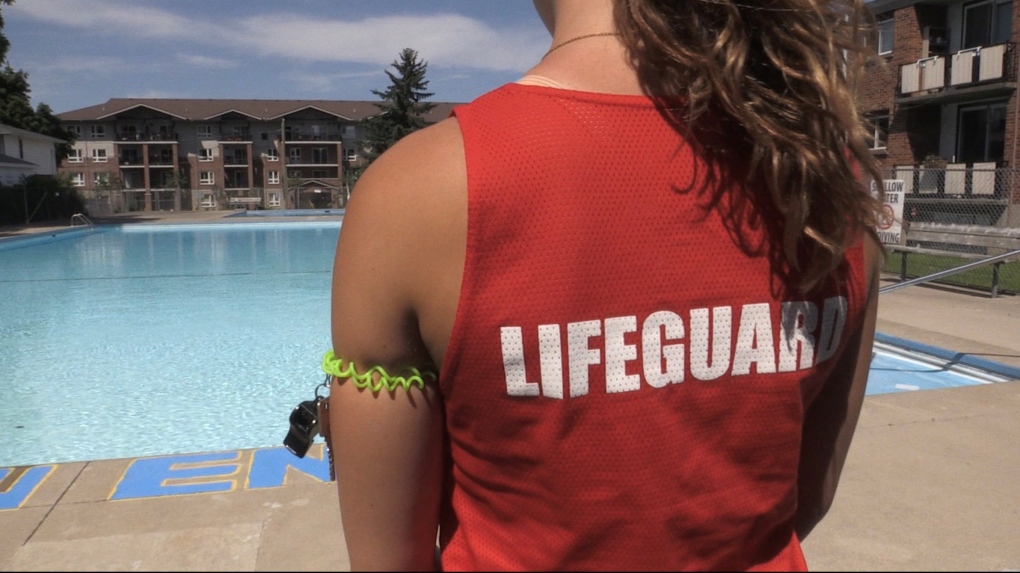 A lifeguard stand by a pool. (CTV Kitchener)

Public pools all over the country are facing lifeguard shortages this summer.

It's a problem that's been created by the pandemic.

In Waterloo region, pools are scrambling to keep up.

“We don’t have the abundance of applicants we normally have,” said Patrick King, manager of aquatics for the City of Kitchener. “I think this is just the tip of the iceberg when it comes to staff shortages.”

Amy Ross, the recreation programmer for the City of Cambridge said they are also seeing fewer staff than normal.

The National Lifesaving Society said the pandemic is to blame for the shortage. During the two years of restrictions, pools had to shut down and re-open with a skeleton staff, causing many lifeguards to get laid off.

“They moved on to do other things and they’re living their lives doing something else, so they’re not really eligible to work now” said Barbara Byers with the Lifesaving Society.

Byers said training to become a lifeguard starts at a young age, and requires several pre-lifeguarding courses, such as Bronze Medallion and Bronze Cross, in order to become qualified.

“There’s a shortage of people because they haven’t taken those pre-lifeguarding courses over the past two years. So there aren’t as many eligible to take courses as there might have been,” Byers said.

“We can’t just put a sign up that says ‘open for business, apply for a job’ and hire people. You have to make sure they have all of the qualifications,” she said. “It’s a big problem.”

'WE DEFINITELY ARE SCRAMBLING'

The cities of Kitchener and Cambridge said right now they have enough lifeguards to staff all the public pools, but said the problems will start if someone calls in sick.

“It’s always a concern as soon as a staff member calls in sick,” said Ross. “Gone are the days where we said ‘okay, we’ll just post the shift and we guarantee’. We definitely are scrambling.”

“[We’re] having to be proactive in recruit instead of just posting there’s a job available,” explained King. “We’re reaching out to past candidates, reaching out to people we were interested in employing in the past.”

King and Ross said they are encouraging anyone who may be interested in the career, to start signing up for courses.