A Guelph man isn’t letting his age get in the way.

Jim Stevenson, 66, has been promoted to black belt in jiu-jitsu, making him the oldest person in his dojo to receive the belt.

Stevenson got into martial arts 17 years ago after a health scare.

“I was a rather fat person, diabetic. The doctor told me unless I become an athlete, I would die a horrible death,” he told CTV News.

Having no athletic activity in his past, Stevenson took up running, but quickly realized he didn’t enjoy it.

Then he found the Brazilian Jiu-Jitsu Dojo in Guelph. 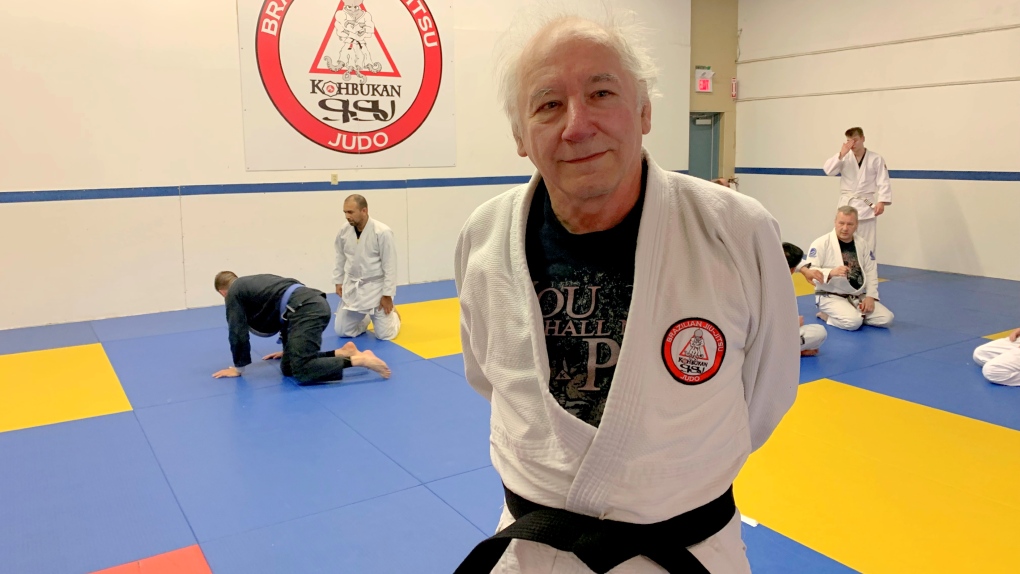 “[Jiu-jitsu] is the most strenuous thing my high school coach spoke of,” he said. “You attack someone and you carefully don’t kill them.”

He lost 77 pounds in six weeks and was on a healthy path forward.

However, in 2016, his past caught up to him. He underwent a quadruple bypass surgery for four clogged arteries.

After an eight-week recovery, Stevenson was back on the mat. He credits jiu-jitsu for saving his life.

“It keeps me alive and it keeps the blood sugar levels down,” he said.

After years of training and progressing through the various belt colours, two weeks ago, Stevenson was promoted to black belt.

He now stands at the front of the class with the coloured belts behind him and is a mentor for other students.

Rob Veltman, Stevenson’s professor said he is the oldest person in his dojo to earn a black belt.

“It’s a tough sport and it’s a sport where even a lot of young guys will quit, but Jim stuck through it the entire time,” Veltman said.

Veltman said it typically takes about ten years to get a black belt, but for Stevenson it took 17.

“He’s put in the time,” Veltman said. “[Seventeen] years is a long time to be waiting and because he didn’t have those natural athletic skills, it took him longer than most people would. But he stuck with it the entire time, so he deserves it.”

British Prime Minister Boris Johnson resigned Thursday, acknowledging that it was 'clearly the will' of his party that he should go. He stepped down immediately as leader of his Conservative Party but plans to remain as prime minister while the leadership contest is held.

Here's who could replace Boris Johnson as U.K. prime minister

Boris Johnson was due to resign as Britain's prime minister on Thursday, bringing an end to a turbulent two and half years in office and triggering a search for a new leader.

Five men are being hailed as heroes by the Ontario Provincial Police after saving a man from a burning vehicle on a Toronto-area highway earlier this week.

The next stage in the battle against COVID-19: bivalent vaccines

Several vaccine manufacturers are racing to develop formulas that take into account the more infectious Omicron variant now driving cases, while policymakers are laying the groundwork for another large-scale vaccine blitz.

A well-known Ukrainian paramedic who was held prisoner by Russian and separatist forces for three months after being captured in the southeastern city of Mariupol has accused her guards of psychological and physical torture during her time in captivity.

Canada will keep ArriveCan for its data on COVID-19-positive travellers: sources

A staggering 71 million more people around the world are experiencing poverty as a result of soaring food and energy prices that climbed in the weeks following Russia's invasion of Ukraine, the United Nations Development Program said in a report Thursday.