'Irrelevant and obsolete'? Schools moving away from teaching cursive writing 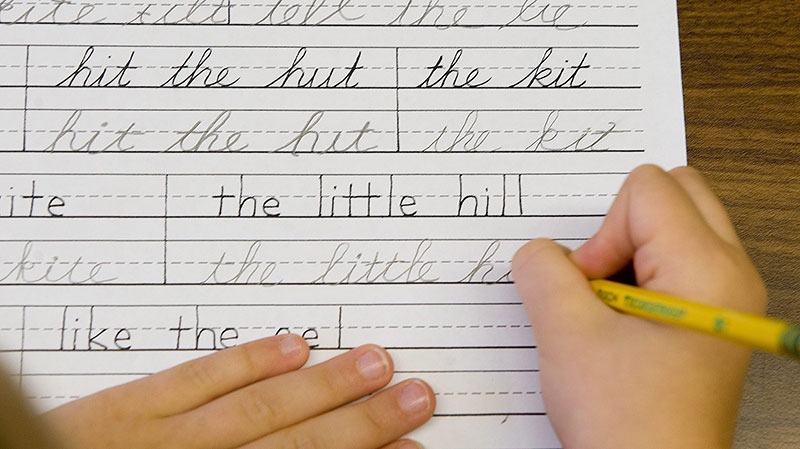 A student practicing both printing and cursive handwriting skills in the six to nine year old's classroom at the Mountaineer Montessori School in Charleston, W.Va., Sept. 16, 2009. (AP / Bob Bird)

Cursive writing is no longer a mandatory part of Ontario’s education curriculum.

It’s now something that can be taught at teachers’ discretion – and if Brantford-area Catholic schools are any sort of a barometer, it appears quite a few teachers are choosing to exercise that discretion.

The Brant Haldimand Norfolk Catholic District School Board recently surveyed the principals of its 29 elementary schools, asking them whether cursive writing was being taught in their schools.

According to a report prepared for board trustees, about 40 per cent of principals reported that cursive writing was being formally taught in their schools.

Several years ago, Ontario’s curriculum was changed to erase a specific requirement for cursive writing to be taught.

Instead, formal handwriting was folded under the umbrella of “publishing” – the idea that studnets should know “a range of appropriate elements” for layout and design of written work.

While cursive writing is listed as an example of a publishing technique, the curriculum does not mandate the instruction of cursive specifically, as long as some publishing elements are taught.

According to research presented as part of the board’s report, cursive handwriting is becoming “irrelevant and obsolete” as more and more writing is done electronically, but cursive does have an advantage in that it can be done faster than printing.

Where that falls apart is when children learn printing first. When kids are taught cursive at a later date, the report says, they become frustrated because they can’t write words as quickly as they can with the printing they already know.