An art installation in Waterloo featuring Black, Indigenous, and racialized community members has been vandalized.

The artists say this is the third time one of their projects has been damaged.

“The installation has only been up four days and I already received an email from the City of Waterloo saying that one of the signs was pulled out and thrown over,” said Bangishimo Johnston, a local Indigenous artist.

The art display in Waterloo Park was created to spark a conversation, but instead has been repeatedly targeted by vandals.

Johnston said the display has been vandalized twice before at other locations in the city.

“Most of the pictures had actually been torn out of the ground and thrown into the bushes nearby. After the installation went back up, it went down again a few days later.”

The damage is still visible.

“It makes me wonder why people are so upset,” said Johnston. 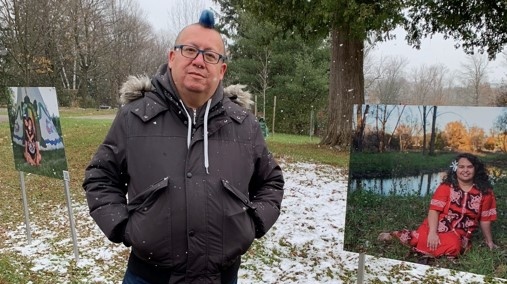 The installation includes portraits with a QR code that viewers can scan to hear a personal story.

“All sharing their stories on what it means to them to live on this Indigenous territory,” said Johnston.

“This is something that really disappoints the entire community,” said Waterloo mayor Dave Jaworsky. “We want to move forward and to have great conversations.”

Johnston said city officials also discussed the possibility of putting up cameras in the area.