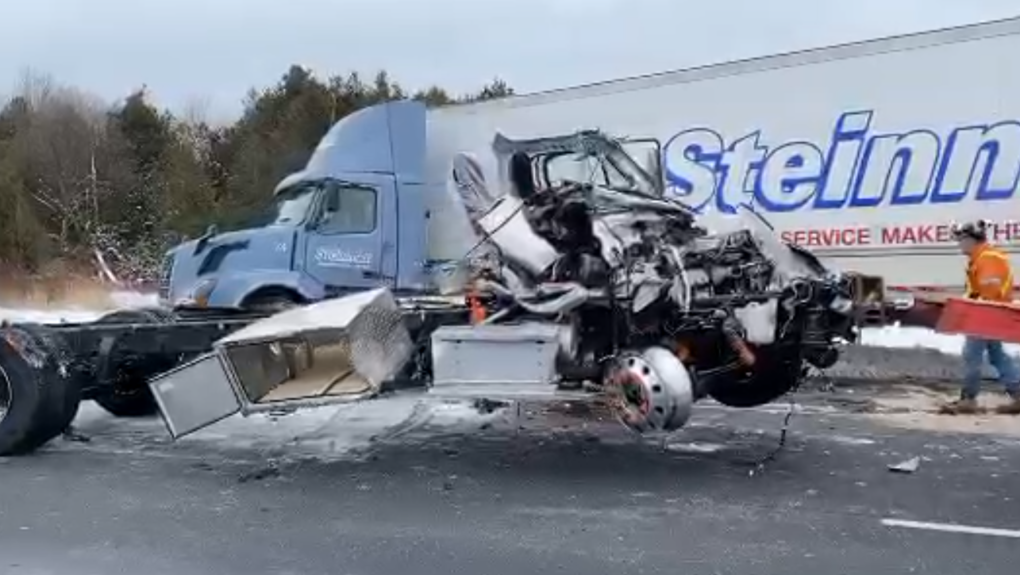 Two of the three vehicles involved what police say was a "horrific" crash. (@OPP_HSD / Twitter)

KITCHENER -- A three-vehicle crash on Highway 401 eastbound in Newcastle, Ont. has left a 40-year-old man from Ingersoll dead.

Provincial police first responded to the crash at around 6 a.m.

"The collision scene here is obviously horrific, as you can see," Sgt. Kerry Schmidt said in a video posted to Twitter.

Police say that a transport truck was broken down or disabled on the right shoulder of the eastbound lanes.

A straight truck heading east collided with it from behind, becoming wedged underneath it.

The drivers got out to speak to one another about the crash when the third vehicle, another transport truck, collided with the side of the straight truck.

One of the drivers who was outside of his truck was pinned between the vehicles. Police say he was the one killed.

His name has not been released.

Both lanes were closed temporarily but the westbound lane has reopened since reopened.

Police say they need to offload some of the cargo since the transport trailers have been compromised.

Traffic was backed up at Mill Street, and police say that they expected the lanes to remain closed until at least 1:30 p.m.

By 12:50 p.m., one eastbound lane was being prepared to be reopened. The Ministry of Transportation said in a tweet at 5:43 p.m. that all lanes had reopened.