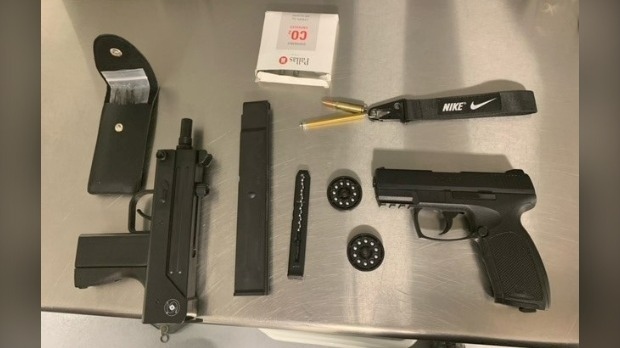 A Guelph man is facing several charges, including assault with a weapon, after he allegedly pointed a BB gun at a woman during a road rage incident on Friday.

In a media release, Guelph police said the woman reported the incident around 5:15 p.m.

She said she had driven through a plaza parking lot at Victoria Road North and Eramosa Road and was followed by another vehicle. The man driving the second vehicle then pulled up beside her, uttered a threat and pointed a black handgun at her.

The woman noted the licence plate and a description of the man.

Police later found the vehicle in a driveway in the north end of the city.

Police said officers spoke to the man and recovered a BB gun inside his jacket and a second BB gun from a satchel he was wearing.

Police also found a lock-picking kit, a balaclava and gloves inside the satchel.

The 24-year-old Guelph man is now charged with possessing a weapon for a dangerous purpose, carrying a concealed weapon, pointing a firearm, use of an imitation firearm while committing an offence, uttering threats and possessing break-in instruments.