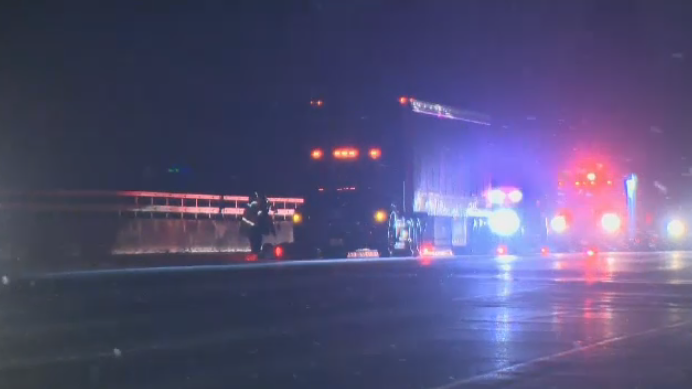 Emergency crews respond to a crash involving a tractor trailer and an e-bike in Kitchener on Tuesday evening.

KITCHENER -- Icy and hazardous road conditions are considered to be factors in a couple of crashes on Tuesday evening, including a crash involving a tractor trailer and an e-bike in Kitchener.

Police say just before the supper hour the bike hit a patch of ice on Victoria Street.

The rider wasn't hurt, but the e-bike was badly damaged.

Police don't expect to lay any charges in this incident.

Meanwhile, in Woolwich Township a portion of Church Street West was closed for a portion of Tuesday night following a two-vehicle crash there.

Emergency crews were called to the crash that happened near Church Street West and Floradale Road just before 5:30 p.m.

According to police, a red pickup truck was travelling east when the driver lost control due to poor road conditions, crossed the center line and struck a white SUV that was travelling west.

A 23-year-old woman from Wellesley Township, who was driving the SUV, was taken to hospital by paramedics with a leg injury.

The driver of the pickup, a 38-year-old man form Drayton, was uninjured.

Church Street West was closed for several hours while police investigated, and a road maintenance vehicle treated the roadway.