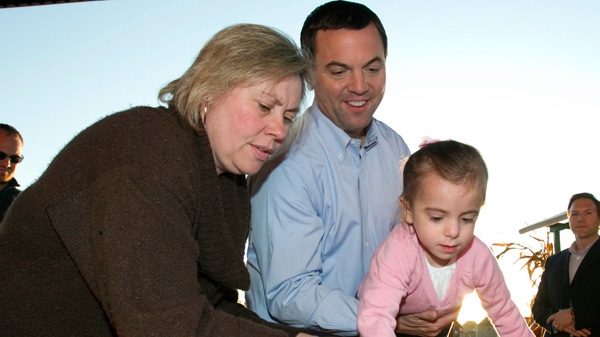 leaders campaign on the last day of the ontario campaign trail

MISSISSAUGA, Ont. - Progressive Conservative Leader Tim Hudak pledged Wednesday to get rid of a gas-fired power plant west of Toronto, just one day before Ontario voters head to the polls.

The Tory leader has repeatedly derided Liberal Leader Dalton McGuinty for promising to pull the plug on the 280-megawatt facility midway through the campaign, calling it a crass attempt to grab votes.

The plant's site is also located in a key battleground in the provincial election -- the so-called 905 area outside Toronto that was painted Tory blue in May's federal election.

And with recent polls indicating that the Liberals have a healthy lead going into Thursday's vote, the Tories are pulling out all the stops to convince voters to support them.

On Wednesday, Hudak took reporters and supporters to a parking lot near the plant site to show that construction is still going on despite the Liberal leader's pledge.

"Look behind me. I mean, this is a living, breathing example of a broken Dalton McGuinty promise," he said.

"How much money are taxpayers going to have to shovel into the ground? And he said the project was cancelled, well then why is work still continuing to this day?"

The Tories never supported the plant, which the Liberals tried to foist on a community that didn't want it, he said.

"To make matters worse, for six years he says it's the right thing, and then 11 days before election day, he does a flip-flop?" Hudak said. "We need a change in our province."

A PC government would go to willing communities like Nanticoke and Lambton, which already have transmission lines and a workforce at power production facilities, he said.

Some local residents who oppose the plant say they're not impressed with Hudak's last-minute pledge, and aren't thrilled with McGuinty's either.

Lori Anastacio, who opposes the plant, said seeing construction at the site is "very frustrating" given that the Liberals promised to stop the plant.

"Yes, it's very odd that they brought it up at the last minute before elections, when they could have cancelled it before," she said.

"It's clearly obvious they're using it. But also the PCs are using it as a card right now. The problem is, it's at the expense of the people."

Residents have long opposed the Greenfield South plant, which straddles the Toronto-Mississauga border, saying it was too close to homes, schools, a hospital, a hospice and a large mall.

McGuinty said the community had changed significantly since the plant was proposed in 2005, which was why his party had changed tack.

Four local Liberal candidates made the promise to stop construction of the plant in a barely publicized announcement Sept. 24.

The New Democrats haven't said what they'd do with the plant. But both Hudak and McGuinty need to be clear about how much their promises will cost, said leader Andrea Horwath.

"Last-minute promises like that, people have to decide whether they're credible or they're not," she said in Niagara Falls.

"Now Mr. Hudak's making the same claim, we don't know what that's going to cost. I think what both these guys need to do is be really upfront with the public about what the cost of cancelling these deals is going to be."

Hudak shrugged off a recent poll that suggests the Liberals will form a historic third majority government -- a major shift from those taken this summer that indicated the Tories were well ahead.

"I think you're seeing polls that are predicting Liberals, polls predicting PCs," he said. "Ultimately tomorrow, voters are going to decide. And I'm confident that voters want change."

Some experts say Hudak's focus on wedge issues -- like calling a proposed Liberal tax credit for new immigrants an "affirmative action" program for foreign workers -- did the Tories no favours during the campaign.

But the rookie leader expressed no regrets Wednesday.

"I'm proud of our team, I'm proud of how hard they worked and the ideas that we have in Changebook," he said.

"Relief for families, more private sector jobs, reining in government spending -- and that came from hardworking families right across this province."