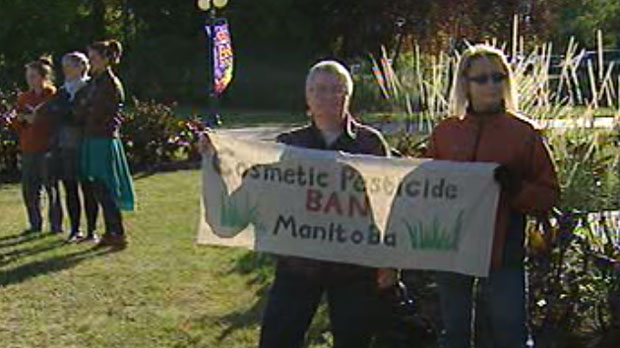 A group holds a sign to protest the use of cosmetic pesticides in Manitoba, just before a petition for a ban on the pesticides is presented at the legislature.

Environmentalists are declaring victory over a federal government announcement that it will conduct a health review of 23 pesticides, including a weed killer found everywhere from wheat fields to suburban lawns.

But they point out the decision comes only after several lawsuits were filed last summer and suggest it shouldn't take legal action to get Ottawa to follow the law.

"It is a victory in that sense, that we're getting them to do something they've never done before," said Elaine MacDonald of the environmental law group Ecojustice. "But we shouldn't have to sue them to get them to do it."

Last August, four lawsuits were filed over 29 chemicals, all of which Ecojustice said were banned in Europe. The federal government is obliged by law to review chemicals that are banned in any country belonging to the Organization for Economic Co-operation and Development.

Health Canada had originally declined to do any studies. It said some of the chemicals had been recently examined and found to present acceptable risks. The agency added that it wanted to consider reasons for the European bans before conducting studies on the others.

"The (agency) ... has determined that this subsection's criteria have been met, namely that a member country of the Organization for Economic Co-operation and Development prohibits all uses of this active ingredient for health or environmental reasons."

Four of the six chemicals Canada won't review were found to be still in limited European use -- restricted to functions such as anti-flea dog collars. The final two are not used in Canada.

"2,4-D is one of the most common herbicides out there," said MacDonald. "It's in many household products. 2,4-D is what I would characterize as ubiquitous."

Norway banned the chemical in 2000 over concerns about its links to cancer and its ability to migrate into groundwater.

Other common chemicals to be reviewed include:

In a Jan. 9 letter to Ecojustice, a federal lawyer points to the government's review plans and asks the group to drop its lawsuit.

"In our view, the usefulness of that exercise is seriously undermined by the consultation document," wrote Elizabeth Kikuchi.

Ecojustice lawyer Laura Tessoro said the court action has only been placed on hold and remains on the books.

"The agency doesn't have a great track record of committing to doing special reviews under the act," she said. "This is basically the first time it's ever agreed to do them.

"In light of that, we need to keep the pressure on."