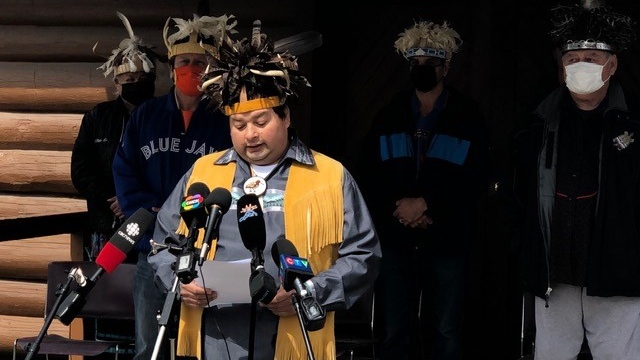 Deyohowe:to (Roger Silversmith) calls for a moratorium on development within the Haldimand Tract during an announcement outside the Onondaga longhouse on Six Nations. (Spencer Turcotte / CTV News)

KITCHENER -- The Haudenosaunee Confederacy Chiefs Council (HCCC) announced Tuesday it wants a moratorium on development within the Haldimand Tract.

The area covers about 384,451 hectares along Ontario’s Grand River, including parts of Kitchener, Waterloo, Cambridge and Brantford.

The HCCC, which is the traditional government of the Six Nations of the Grand River, is calling for a ban on development, unless given consent by the Haudenosaunee.

“There’s been a generation of young ones who are now taking the land rights issues in their own hands to protect the lands,” said Deyohowe:to (Roger Silversmith), Cayuga Snipe chief. “Now they’re the adults who are defending our lands and if this stuff caries on, it’s going to be like that again.”

It was not outlined exactly how, or if, the moratorium will be enforced, but Deyohowe:to says there is a body put forward by the Haudenosaunee that will be monitoring it.

Given the large area the Haldimand Tract covers, it’s also unclear how many developments are underway that don’t have the permission of the Haudenosaunee.

“Right now, to me, it’s more on the federal government and their side to step up and take charge on their side for their wrongdoings,” Deyohowe:to said.

Tuesday marks 275 days since Haudenosaunee land defenders took over a piece of land in Caledonia they renamed 1492 Land Back Lane, slated for a subdivision by Foxgate Developments. The developer has previously stated the land was bought legally.

Skyler Williams, a spokesperson for the land defenders, was also at Tuesday’s announcement. He was asked if future developers should expect to see the same thing that happened at 1492 Land Back Lane, such as blockades, wherever they want to develop within Haudenosaunee land.

“There’s 27,000 people at Six Nations. And there’s many more that are anxious and willing to do whatever it takes to make sure that our land rights are upheld,” Williams said.

The announcement also marks the 15-year anniversary when provincial police conducted a raid on protesters occupying the Douglas Creek Estates subdivision project, which was later bought by the Ontario government.

Deyohow:to says the elected band council was made aware of the announcement.