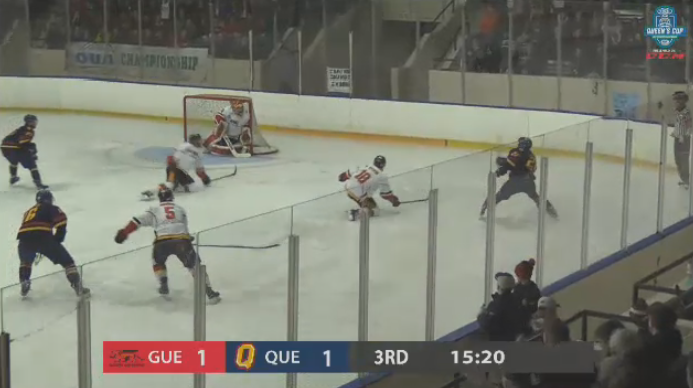 Going into last season’s OUA hockey playoffs, many wouldn’t have picked the Guelph Gryphons to make it to the finals.

With 13 wins and 15 total losses during the regular season, the Gryphons men’s hockey team finished in fifth place in the Western conference.

But in the playoffs they found their stride.

“Our guys learned to live right in the moment, every game of every series,” says head coach Shawn Camp.

That ability took them to the Queen’s Cup. They lost but Camp says they took a lot of positives from it.

“It was a good learning experience for our newer guys and a great reward for our veterans,” says the head coach.

It was a good season overall but one that has still left the team wanting more.

“Getting to the Queen’s Cup was awesome but we still feel like we have some unfinished business,” says Camp.

His goal is to make it back to the Queen’s Cup and win it all.

The Gryphons graduated ten players in the off season, meaning the team needed to bring in new talent who can fit in right away.

“Guys that have come in this year all fill different roles,” says Camp about the new recruits.

Those new players include Cole Cameron and Zachary Poirier who both played in the OHL last season.

Zach Roberts is also a newcomer. He won an OHL Championship with the Guelph Storm.

“These are the kind of guys we’re looking for, with lots of character that will hopefully be able to step in and contribute right away because we have so many open spots this year,” says the head coach.

With all the new players, Camp thinks it will take some time for the team to gel, especially with many of them moving from a smaller NHL sized ice to a larger Olympic sized ice used in the OUA.

“Getting them adjusted to our Gryphon culture and to the aggressive fast way we like to play,” he says is a key to success.

The coach says they need to be patient while they get forward lines and defensive pairings sorted out but the players are ready for the season to begin.

“It’s just been going to class for the first few weeks of school so now it’s time to play,” says Camp.

The Gryphons begin their season on Friday in Toronto against the University of Toronto Varsity Blues.