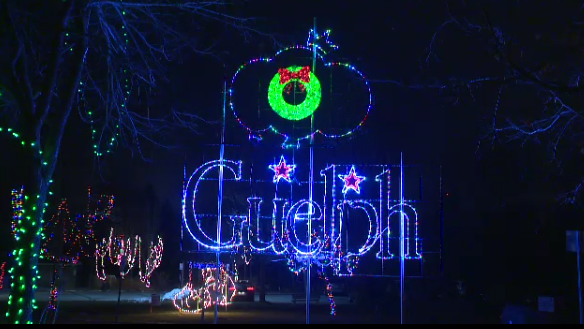 A light display at the Sparkles in the Park event in Guelph.
KITCHENER -

Guelph’s Santa parade has been cancelled for the second year in a row.

In a press release, the Downtown Guelph Business Association says they are “unable to go ahead under current restrictions” and there were “many factors that have contributed to this decision.”

Parade organizer Sam Jewell is quoted as saying that “unlike other outdoor events that take place in easy-to-enclose spaces, there are multiple access point to a parade making it impossible to manage social distancing and crowd capacity.”

She goes on to say in the release that with less than two months until parade day they made the decision to pursue an alternative option.

The Downtown Guelph Business Association is teaming up with the Rotary Club of Guelph for this year’s Sparkles in the Park. It will feature dozens of light displays in Riverside Park that visitors can walk or drive through.

The DGBA says in lieu of a Santa Claus parade, Jolly Saint Nick will appear in an enormous snow globe.

They add that it was a very popular addition to last year’s festival.

“It was magical,” says Jewell in the release. “People got to see Santa as he sat and waved from the safety of his snow globe, surrounded by the beautiful illuminations, and we are grateful to the Sparkles organizers for including him.”

Dates have not yet been announced for this year’s event.

The gang that kidnapped a group of 17 American and Canadian missionaries in Haiti has asked for US$1 million each for their release, a top Haitian official told CNN Tuesday. The 16 American citizens and one Canadian were kidnapped by the powerful '400 Mawozo' gang on Saturday.

'We have made the impossible possible': Calgary, Edmonton celebrate mayoral firsts

Alberta's two major cities are set to make history in their mayoral races after Monday's municipal elections across the province.

Rechie Valdez has turned self-described 'side hustles' into full-time focuses as an entrepreneur, and is now taking on a new challenge: Liberal MP for Mississauga-Streetsville. In taking her seat in the House of Commons next month as one of 50 rookies elected, she'll also be making history as Canada's first federally-elected Filipina MP.

A Metro Vancouver woman is looking for answers following the untimely death of her dog aboard a flight last summer.

A group of quick-thinking young men were forced to get creative by using their turbans as a makeshift rope to help rescue a pair of hikers in a Metro Vancouver park earlier this month.

A new survey suggests that the rising cost of living and the added burden of COVID-19 are forcing Canadians further into debt.

Just weeks before Céline Dion was set to return to the stage in Las Vegas, the Quebec superstar is delaying her show due to "unforeseen medical symptoms," her team said in a news release.