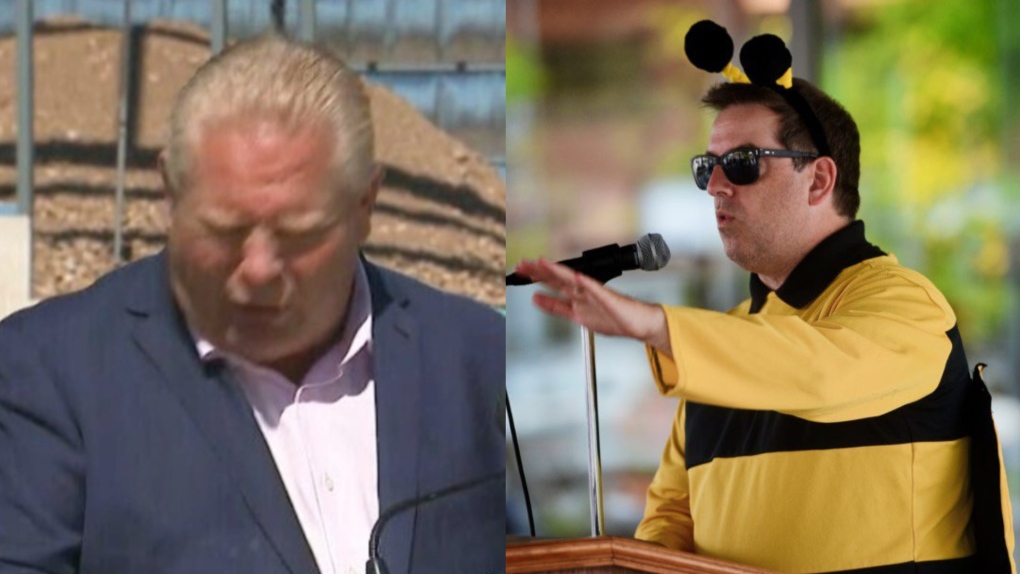 The mayor of Guelph has taken a friendly jab at the premier of Ontario following a viral clip of Doug Ford swallowing a bee at a news conference.

Ford swallowed the bee Friday while making an announcement near Barrie.

He laughed it off and called it a blooper, while a spokesperson for the premier says he's doing well after the incident.

Just a few hours, Guelph Mayor Cam Guthrie tweeted a photo of him in a bee costume at a podium.

I’ve got my outfit ready to meet with @fordnation this weekend at @AMOPolicy! 😉🐝 pic.twitter.com/fmIOv0Q0Rd

"I've got my outfit ready to meet with @fordnation this weekend at @AMOPolicy!" the tweet from Guthrie reads.

Both Guthrie and Ford will be attending the Association of Municipalities of Ontario conference being held in Ottawa.

Hurricane Ian made landfall in southwest Florida near Cayo Costa on Wednesday as a catastrophic Category 4 storm. About 2.5 million people were ordered to evacuate southwest Florida before the storm hit the coast with maximum sustained winds of 150 mph (241 km/h).

Coolio, the rapper who was among hip-hop's biggest names of the 1990s with hits including 'Gangsta's Paradise' and 'Fantastic Voyage,' died Wednesday at age 59, his manager said.

With Category 4 Hurricane Ian barrelling toward Florida on Wednesday morning, some of the state's popular theme parks. national parks, gardens, and cruise schedules have been closed or impacted.

In the aftermath of post-tropical storm Fiona, the premier of Nova Scotia is calling on telecommunications companies to 'step up', saying that many residents are still without cell phone service or access to 911 days after the storm pummelled the province.

NDP Leader Jagmeet Singh says Conservative Leader Pierre Poilievre should not be opposing a dental benefit for children in low-income homes when MPs receive far broader coverage for their families.

Jeremy MacKenzie, the founder of the online group 'Diagolon,' was arrested in Nova Scotia on Wednesday on charges related to an allegation of assault in Saskatchewan from last year.

New York Yankees outfielder Aaron Judge tied the MLB American League record for most home runs in a single season Wednesday night during a game against the Toronto Blue Jays at Rogers Centre.

U.S. Border Patrol said on Wednesday that 23 people were missing off the coast of Florida after a Cuban migrant boat sank due to Hurricane Ian.