A Guelph cyclist has died after being hit by a GO train Thursday afternoon.

The 31-year-old man was transported to a Hamilton hospital by air ambulance following the crash just after 5 p.m. Thursday.

At 12:20 p.m. Friday, police announced he had died from his injuries.

Loretta Allen, senior manager of community engagement, confirmed with CTV News it was a GO Train involved in the collision.

“We understand that Guelph Police Services have concluded their investigation into the incident and our thoughts are with the family of the victim,” said Allen in an email. “Safety is central to everything we do at Metrolinx. Metrolinx regularly conducts assessments of grade crossings to identify those that would benefit from further enhancements for the community and customers.”

Police said the investigation found the cyclist rode around the barrier “for an unknown reason” before colliding with a passing train.

Police could not confirm if the man was wearing a helmet at the time, but say the intersection is fully signaled.

“There are barricades on both sides for north and southbound traffic as well as flashing lights and bells, so full signalization, and we understand that was activated at the time of the incident,” said Scott Tracey, Guelph police spokesperson.

The crash closed Edinburgh Road North between Waterloo Avenue and Paisley Road for around two hours.

“Emergency services were called to the train tracks on Edinburgh Road between Paisley and Waterloo Avenue. The investigation revealed a southbound cyclist on Edinburgh Road entered into the intersection of the train tracks and collided with a westbound train,” said Tracey. “That individual was taken by air ambulance to Hamilton trauma centre with life-threatening injuries.”

Tracey said forensic officers were on the scene taking photos and measurements to assist with the investigation.

“There was a lot of trauma, some very apparent injuries that were something that without an extensive first aid background you’re kind of at a loss of what to do,” said Voth.

In December of 2021, Metrolinx GO Trains began moving through the area where the collision occurred at their new top speeds.

The trains gradually increased in a step pattern over a nine-week period, with speeds increasing every three weeks.

Those who live near the tracks say some trains do go by pretty quickly.

“The train is closer than you think by the time the gates go down, so I think that’s the part we get nervous about,” said Sarah Duignan, who lives nearby. 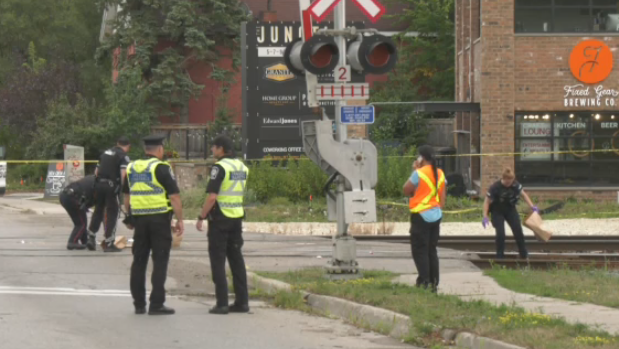 Police near the collision between a train and cyclist in Guelph. (Dan Lauckner/CTV News Kitchener)

At the time of the collision, police identified the victim as a 32-year-old man. They later said he was 31. The article has been updated.