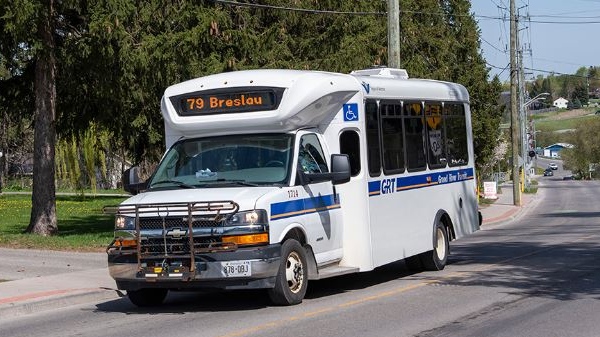 Grand River Transit is introducing a new flexible transit option in the community of Breslau.

Starting July 11, residents can book a trip on bus 79 which will take them to key locations, as well as connecting up with other GRT and GO Transit routes.

GRT says customers can try it out for free until Sept. 2.

The on-demand service is part of a pilot program with Metrolinx.

Trips on route 79 can be booked on the GRT Flex app. Grand River Transit says there's no fixed route or schedule for the bus, and it will travel the most efficient route for customers as well as its planned pickups and drop-offs.

Route 79 will link up to the rest of the GRT network at Victoria Street North and Lackner Boulevard in Kitchener.

It will also take travelers to the Region of Waterloo International Airport.

"For the first time, we'll have a transit option for residents travelling to and from our growing airport," Neil Malcolm, the acting director for transit services, said in a media release.

This is the latest flexible transit option offered in the Region of Waterloo, providing "service for areas that are difficult to serve with regular, fixed bus routes."