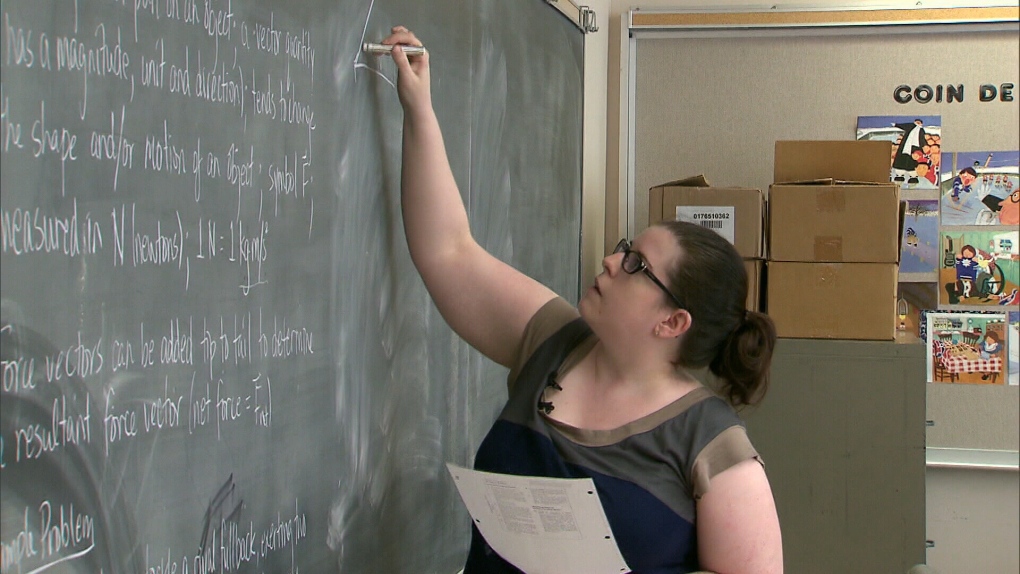 A teacher writes on a chalk board in this file photo.

Premier Doug Ford warned teachers Tuesday not to "pull this strike nonsense," with a likely challenging round of bargaining set to start as soon as this month.

Teachers' unions have already expressed concerns about a recent education announcement from the government, which includes larger class sizes for grades four to 12. That will mean thousands of teaching jobs are lost, they say, though the education minister has said no teacher will "involuntarily" lose their job.

Some school boards have written to the minister with concerns that planned increases to class sizes will mean they can offer fewer elective courses, such as in the arts and skilled trades, and the Toronto District School Board has said it will have to account for a $28.7 million shortfall next year because of the province's changes to education funding.

The Progressive Conservative government's recent budget pegged education spending growth at 1.2 per cent, but that increase is largely due to higher student enrolment, instead of new programs, and is lower than the rate of inflation.

Teachers' and education workers' contracts expire at the end of August, and the government has signalled its intent to start negotiations as early as April 29. When asked Tuesday about the possibility of strikes, Ford said the teachers' unions wage job action against Ontario governments of every stripe.

"Before the ink was even dry on election day they declared war on us -- the unions, not the teachers," Ford said after an announcement in Markham.

"I think it's a pretty good deal that they have right now. They get their three months holidays. They have the best benefit package in the entire country, the best pension in the entire country, the health plan. They have a great gig, if you want to call it (that). They do a great job, by the way, and I appreciate all the teachers, but guys, don't pull this strike nonsense on the parents and on the poor students."

Harvey Bischof, president of the Ontario Secondary School Teachers' Federation, said there is no war on government.

"Nothing could be further from the truth," he said. "We are making every effort to reach out to the government to try to establish a productive dialogue in order to resolve any issues that might arise."

Thousands of teachers and supporters filled the front lawn of the legislature recently to protest the government's changes to education.

Ford also said an Aug. 31 expiry date for teachers' contracts -- right before kids go back to school -- will never happen again under his government, but Education Minister Lisa Thompson was less equivocal.

"I respect the premier, but again, I respect our consultation process and the importance of making sure we have good faith conversations with our labour partners and our education partners," she said.

NDP Andrea Horwath predicted a rough round of bargaining.

"I would hope that we could expect a respectful, thoughtful discussion about the collective agreement that is due for renewal," she said. "Unfortunately, we see the premier already demonizing teachers."

Boards and teachers have also expressed concerns about Thompson's announcement that starting in 2020-21, students will be required to take a minimum of four credits out of 30 through e-learning courses.