Commercial flights in and out of Region of Waterloo International Airport were cancelled Friday after a Flair Airlines plane carrying 140 people overran the runway during landing.

A spokesperson for Flair Airlines says flight F8 501 from Vancouver to Kitchener-Waterloo “exited the runway at the end of its landing.”

According to a flight tracker, the plane landed around 6:25 a.m.

The airline says there were no injuries reported, and passengers were taken to the terminal by bus.

There were 134 passengers and six crew members on board the Boeing 737.

The Transportation Safety Board (TSB) has been deployed to investigate.

'OOPS, WE MISSED THE RUNWAY'

One of those passengers, Kitchener resident Paul Anstett, says he was taking the red-eye flight home after being in Vancouver for business.

Anstett says he was looking out the window of the aircraft and noticed something felt different when it was time to land. 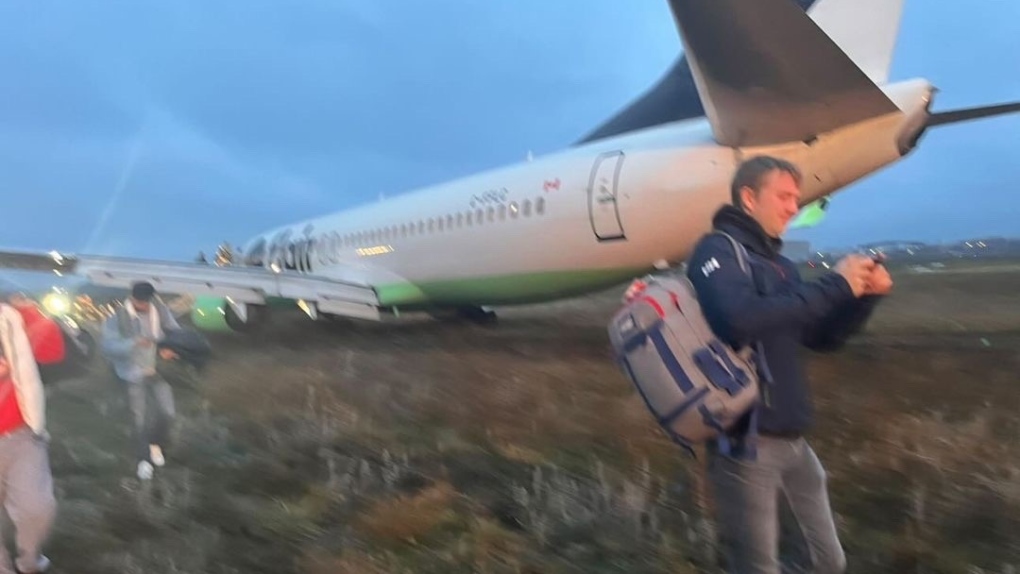 Passengers of Flair Airlines flight F8 501 disembark onto grass after a botched landing at Region of Waterloo International Airport on Nov. 25, 2022. (Amanda Ramnarine/Submitted)

“The plane was dancing on the runway a bit. It was moving side to side,” he told CTV News.

Anstett says even though the landing felt “a little bouncy” most passengers around him seemed calm and there was no screaming or panic inside the cabin.

“Oops, we missed the runway,” Anstett said. "I looked at the person next to me, and I said, ‘we’re in the grass.’”

He says he is relieved the field where they landed was level and is grateful no one was injured. 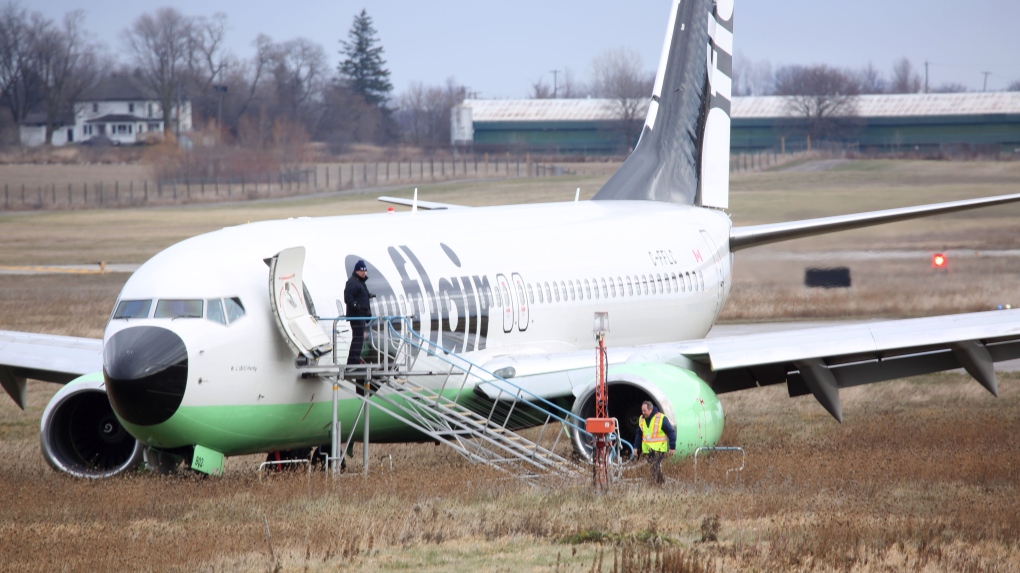 As of noon Friday, the plane remains on the grass at the airport. (Submitted/Lou Ferrigno)

According to Anstett, passengers were able to take their personal carry-on luggage from inside the cabin, but checked luggage was not unloaded from the plane.

Anstett, who says he travels out west a few times a year, said the experience won’t deter him from flying with Flair Airlines again. But he joked that there are some things the upstart budget airline could improve upon.

“I just received a text message from Flair asking me ‘how was my Flair experience today’ and I kind of laughed at that. I am probably going to respond and say the experience was fine but it might be nice if I was brought to the terminal instead of the field next time,” he said.

Investigators with the Transportation Safety Board arrived at the airport around 9:30 a.m.

At this point it remains unclear what caused the plane to leave the runway.

The Region of Waterloo International Airport was closed to commercial traffic for the rest of the day Friday. Other Flair Airlines flights arriving and departing from YKF, as well as two West Jet flights, were cancelled.

Authorities in Western Australia on Wednesday recovered a tiny but dangerous radioactive capsule that fell off a truck while being transported along a 1,400-kilometer (870-mile) Outback highway last month in what an official said was like finding the needle in the haystack.

Andrew Tate, the divisive influencer and former professional kickboxer who is detained in Romania on suspicion of organized crime and human trafficking appeared at a court in Bucharest on Wednesday to appeal against a second 30-day extension of his detention.

The backlog of airline complaints to the Canadian Transportation Agency since December's travel chaos balloons by thousands, a Conservative MP raises concerns over the government's quarantine hotel spending, and a Toronto man raises money for charity after spending 24 hours in a diner due to a lost bet. Here's what you need to know to start your day.