First snowfall of the season for Waterloo Region 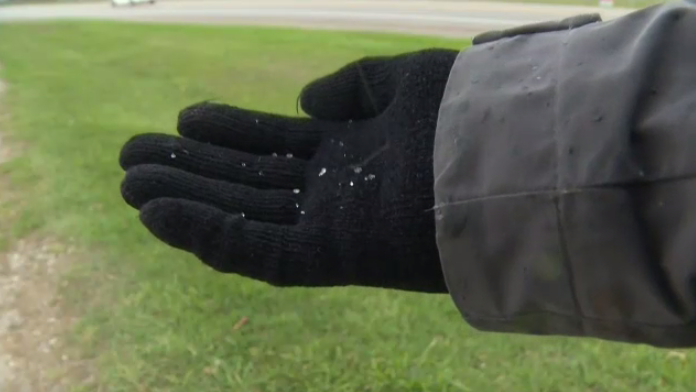 You may have noticed something different falling from sky Tuesday afternoon, as parts of Ontario experienced their first snowfall of the season.

Depending on where you live, you may have noticed it on the ground as well.

Environment Canada Meteorologist Rob Kuhn said he certainly noticed, “Ironically I was mowing the lawn trying to get it in before it came.”

The Kitchener resident said before he was able to finish the summer-like job, conditions changed on him quickly.

“I saw a few showers and then what looked like clear little ice pellets. Then shortly after that we actually did see wet flurries here. You could see snowflakes sticking, mixed with showers.”

Only two days after Halloween, Mother Nature has dropped the first flurries of the season for most of Southern Ontario.

And not everyone enjoyed the burst of winter weather.

“I saw the first snowfall this afternoon and it was not a happy sight to be sure,” Resident Maja Kokotovic told CTV News while taking a stroll through Kitchener’s Victoria Park.

“I could do better if it waited a couple more weeks,” Kitchener resident Scott Hamilton stated, while promptly adding that his favorite season is summer and not winter.

Residents in Grey Highlands woke up to nearly 2 cm of snow on the ground Tuesday afternoon, most of which melted by the afternoon.

Viewers in Port Elgin and Elmira also sent in videos of the blistering winds and white flakes.

Kuhn said it is right on que, “A typical first snowfall of the season around here is the first half of October to the end of November.”

The timing is a bit of snow-ja-vu for residents of Southern Ontario.

Coincidently, exactly one year ago, Waterloo Region and area woke up to three centimeters of snow on the ground.

“We woke up and it was white,” Kuhn remembers.

That was the first accumulative snowfall of 2020, which happened one year and just a few hours before the first flakes of 2021 arrived Tuesday.

As temperatures continue to slowly drop, the chance of precipitation changing form is inevitable.

“At less than 4 [degrees] you can start to see a wet snow mix,” Kuhn explained.

According to Environment Canada, the daytime high in Kitchener was 5.5 degrees at the noon hour, with winds nearing 40 km/h making it feel even colder.

For those who aren’t ready for winter, the bright side is that we were nowhere near our snowfall record for this day.

Most people may be happy that Mother Nature at least waited until after Halloween this year.

“The earliest ever we’ve had a trace of snow reported, September 23rd, 1950 ,” Kuhn said, thankful, that was just the one occurrence.