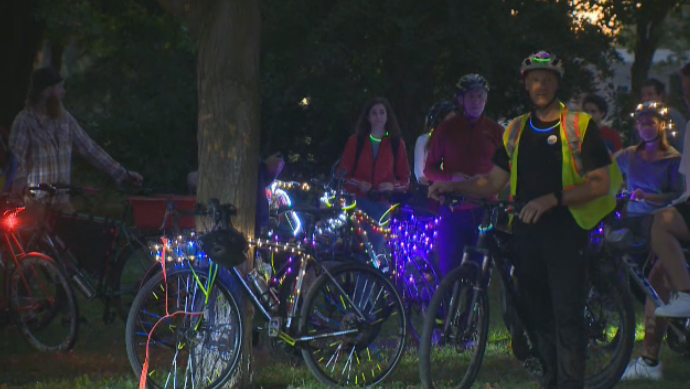 The Guelph Coalition for Active Transportation (GCAT) held its inaugural Bike the Night on Saturday.

Residents gathered at Exhibition Park around 7 p.m. in costumes and fully illuminated bikes to encourage building safer city streets for pedestrians and cyclists.

“We want to kind of emphasize what’s great about our infrastructure in Guelph for biking and what we would like to get in Guelph eventually, like protected bike lanes and more trails [that are] separated from traffic,” said coalition president Mike Darmon.

He added that the new protected bike lanes on Gordon Street are a step in the right direction.

The group ride began at Exhibition Park running through Sunny Acres, Royal City and The Ward before concluding at City Hall.

Prizes were given to the cyclist with the best illuminated bike and best costume.