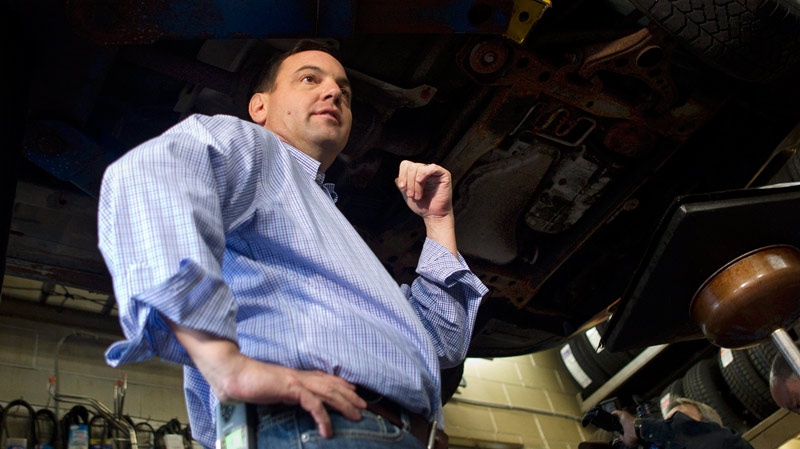 PC Leader Tim Hudak stands under a car during a media opportunity at a Service Station in Ajax, Ont. during his campaign on Friday, Sept. 30, 2011. (Chris Young / THE CANADIAN PRESS)

TORONTO - Canada's finance minister gave the federal seal of approval to Ontario Progressive Leader Tim Hudak on Friday in an attempt to shore up support for a Tory trifecta just days ahead of the provincial election.

Jim Flaherty told a lunchtime business crowd in Toronto that the province can't afford another four years of a Dalton McGuinty government.

The former Ontario finance minister assumed the stage after a heated speech by Hudak, in which he called out McGuinty by his first and last name no less than 25 times.

Flaherty, who worked with Hudak in the Mike Harris government, said he has sat at both negotiating tables and dinner tables with Hudak and believes he is the only leader who can take the province on a new path.

He noted that the province has gone from a net debt of $132.6 billion the year he left his post as finance minister to a net debt of $241.2 billion this year -- almost double in eight years.

"Our country, Canada, is on the right track back to balanced budgets -- it's important that our largest province -- the province of Ontario -- get back on that right track," Flaherty said, using sovereign debt in Europe and the United States to warn of the perils of government debt.

"I know as premier he will bring the same energy, the same dedication to the job that Ontario needs to go down a new path."

Flaherty's endorsement comes just two days after he said in the House of Commons he wouldn't get involved in provincial politics.

"I will get in trouble at home," said Flarhety, who is married to deputy Ontario Tory leader Christine Elliott.

Hudak's speech to the Empire and Canadian clubs blamed McGuinty for watching Ontario fall behind other provinces. He highlighted the differences between the leaders' views on taxes, government spending and job creation.

"On each of these issues, Dalton McGuinty and I have fundamentally different views. He pursues policies that are rooted in a belief that Ontario's best days are behind us ... that the job of premier is to manage our decline," he said.

Hudak added that he plans to follow in the footsteps of his federal counterparts and cut taxes to create jobs.

Liberal campaign co-chair Greg Sorbara called the speech -- along with Flaherty's endorsement -- an act of desperation.

"At this point to simply continue to launch his negative attacks on the premier tells me he doesn't have much to say that's positive and that just shows desperation from my perspective."

Hudak said the endorsement from Flaherty means a lot to him and shrugged off a question about Flaherty's support for the HST, a policy for which Hudak has expressed vocal opposition.

But Hudak has yet to receive an endorsement from right-leaning Toronto Mayor Rob Ford -- the third anchor in achieving the Tory hat trick called for by Prime Minister Stephen Harper during a summer barbecue at Ford's home in Toronto.

"One thing's true about the mayor, that nobody tells him what to do," Hudak said of expectations that Ford would support the Tories.

"Rob will decide what he wants to do in the days ahead."

Conservative-minded Ford threw his support behind Harper just days before the federal vote in May.

But it's unclear whether an endorsement from Ford, who has been making controversial calls to slash spending, would help or hurt Hudak at this point.

Hudak remains confident, however, that the Tories will be able to paint some new seats blue in Canada's biggest city.

"Dalton McGuinty has taken Toronto seats for granted for far too long --there's going to be a lot of change come election day," he said.

Sorbara warned voters about handing the Conservatives a so-called trifecta.

"If I were an Ontarian, I would not want Tim Hudak trying to make arguments to Jim Flaherty about getting the Federal government to invest more ... for the people of Ontario," Sorbara said.

"I just think that relationship is too close."