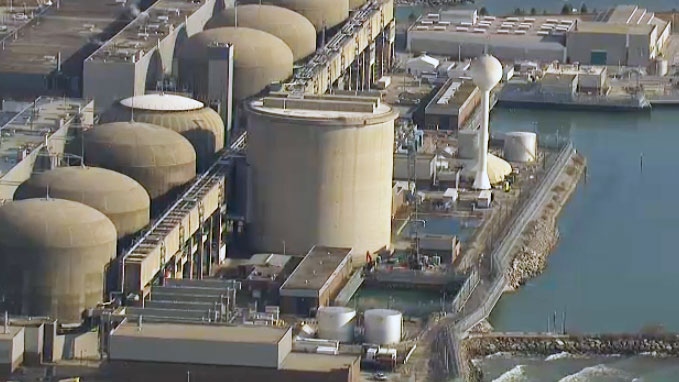 The Pickering Nuclear Generating Station is seen from the CTV News chopper on Monday, Nov. 24, 2014.

TORONTO -- The Ontario government will conduct a "full investigation" to determine why provincial residents woke up Sunday morning to an erroneous alert about an incident at the Pickering Nuclear Generating Station.

The province's solicitor general said the alert, which was pushed to cellphones at about 7:30 a.m., was issued in error during a routine training exercise being conducted by the Provincial Emergency Operations Centre (PEOC).

"There was no incident at the Pickering Nuclear Generating Station that should have triggered public notification. Nor was there ever any danger to the public or environment," Solicitor General Sylvia Jones said in a statement Sunday morning.

The PEOC -- which is responsible for co-ordinating the provincial government's response to major emergencies -- regularly conducts training exercises, but there was no intention to notify the public, she added.

"The Government of Ontario sincerely apologizes for raising public concern and has begun a full investigation to determine how this error happened and will take the appropriate steps to ensure this doesn't happen again."

Ontario Power Generation sent out a tweet about 40 minutes after the emergency alert saying it was a mistake. A follow-up alert was sent to cellphones nearly two hours after the original notification, and about an hour after the OPG tweet.

"There is NO active nuclear situation taking place at the Pickering Nuclear Generating Station," the alert said. "The previous alert was issued in error. There is no danger to the public or environment. No further action is required."

OPG spokesman Neal Kelly said the public was never at risk and there was no radiological event at the nuclear plant, but he declined to comment on who authorized the alert.

"What I can tell you is that we're working with the province to investigate," he said.

The original alert warned people within 10 kilometres of the facility east of Toronto of an unspecified incident, but it went to people as far away as Ottawa. There was no abnormal release of radioactivity and people near the plant didn't need to take protective actions, the alert said.

Pickering Mayor Dave Ryan called for a full investigation into the error.

"Like many of you, I was very troubled to have received that emergency alert this morning. While I am relieved that there was no actual emergency, I am upset that an error such as this occurred. I have spoken to the province, and am demanding that a full investigation take place," Ryan said in a tweet.

Terry Flynn, who teaches crisis communications at McMaster University, said there's a danger that this type of error will erode public trust.

"Whether it's a nuclear plant or it's a community flooding event, these systems are designed to help people make decisions that protect their health and safety.

"When we have continuous problems in these systems, then we have a lack of trust and people begin to ignore them. So that's the biggest fallout from this scenario."

Ontario doesn't have a co-ordinated IT system for emergency management, the auditor wrote. The province tried to implement one in 2009, but discontinued the project six years later, "having spent about $7.5 million without it ever going live."

Pickering has been operating since 1971, and had been scheduled to be decommissioned this year, but the former Liberal government -- and the current Progressive Conservative government -- committed to keeping it open until 2024. Decommissioning is now set to start in 2028.

It operates six CANDU reactors, generates 14 per cent of Ontario's electricity, and is responsible for 4,500 jobs across the region, according to OPG.

This report by The Canadian Press was first published Jan. 12, 2020.

- With files from David Paddon