Did a tornado touch down southeast of Cambridge?

It’s too soon to tell for sure, but an Environment Canada meteorologist says early signs suggest it may have.

“This is still being thought of as a possible tornado,” Geoff Coulson said.

“The damage path itself seems to be relatively narrow. It’s sort of a focused area of damage.”

Whether it produced a tornado or not, the storm hit the community of Sheffield – at the edge of the City of Hamilton, west of African Lion Safari – around 10:30 p.m. Monday.

“It felt like the house had lifted off the foundation,” he told CTV News.

“It turned out the front tree … had fallen on the wires and ripped the hydro lines right out of the house.”

Holliday then watched as the storm took out several trees and moved over to a nearby baseball diamond, where he says it picked up the park’s bleachers and flipped them over.

The damage toll at Mark Wilbrink’s home included a demolished swing set, a trampoline embedded in a tree some distance away, and roof damage.

“We have two slopes on the roof where we lost some shingles,” he said.

Environment Canada investigators are expected to be on-site Wednesday. 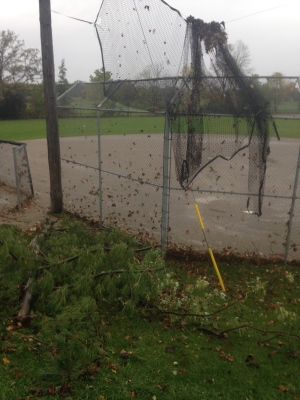