A plan to build a parking lot for transport trucks next to Bolender Park in Elmira is not sitting well with residents.

“[It will] create noise, destroy the quiet peacefulness of the neighbourhood,” said Dan Holt, who lives nearby the proposed site.

39A Holdings Ltd., the owners of 39 Arthur Street North, are seeking a zoning and official plan amendment to allow 1.95 hectares of forest to be converted into a gravel parking lot for over 100 transport trucks and trailers.

The site is currently rented out and sits on a former landfill.

Holt said the proposed lot is unwelcome in this neighbourhood. He has signed an online petition against the proposal that currently has more than 1,000 signatures.

“It just doesn’t make sense. It’s not logical,” said Holt. “There are better uses for that land. Don’t tear it up to put in a parking lot and bring in semi-trucks that nobody wants.” 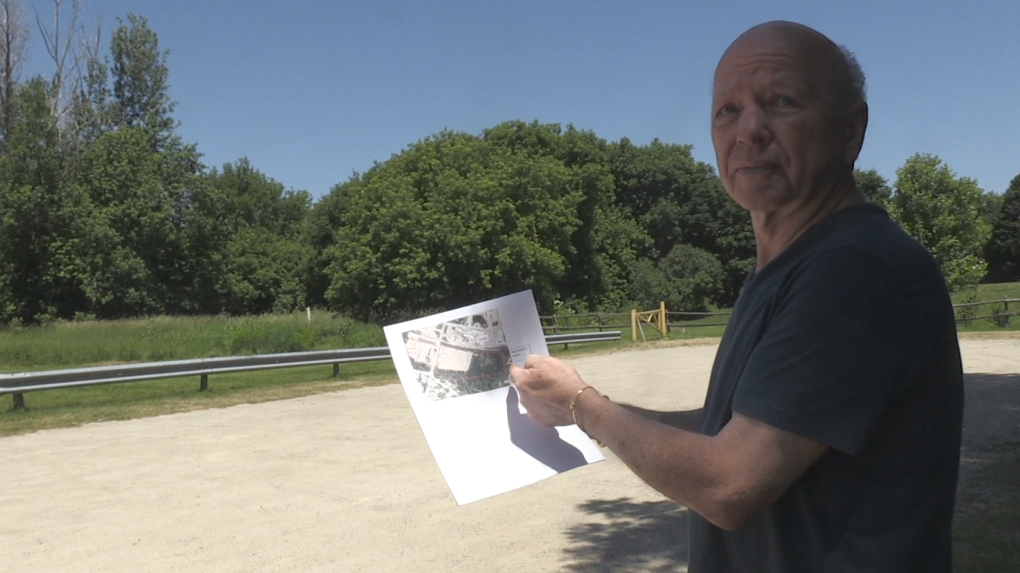 A report submitted to the township states there are 662 trees and the applicant wants to remove about half, indicating that many of the trees are invasive species and in poor condition.

“They are proposing to maintain the perimeter trees,” said Jeremy Vink, the manager of planning at the Township of Woolwich.

Vink explained that because the applicant wants to remove trees, “there’s a requirement that they would have to replace them 1[for] 1.”

He said there is also a butternut tree on the property, which is a provincially protected species.

“They’re not proposing to impact that butternut tree or remove it. They’re going to protect it, and that’s a requirement,” said Vink.

In an email statement, Hugh Handy, the vice-president of GSP Group on behalf of 39A Holdings Ltd. said, “recent invasive species and bushes on the landfill/parking lot will be managed but all of the treed areas between the landfill and the parkland on all sides will be maintained and significantly enhanced through additional plantings,” adding this vegetation will improve tree cover and screen the parking lot from surrounding properties.

Handy added, “the approved use of the property as a scrap yard will be voluntarily rescinded so that it will never be used for that purpose again.”

Those visiting the park Tuesday were disappointed about the proposed development and its possible impact on their little oasis.

“It’s free, it’s cozy, and it’s quiet and my wife and I call it a ‘hidden gem,” described Alexander Goulet, a Breslau resident who often takes his kids to the park’s splash pad.

He said if there was a parking lot in the area, he wouldn’t feel as relaxed having his kids run around.

The Township of Woolwich staff will provide recommendations on the project to council in the fall.

More information about the proposalis is available here.

Canada’s chief public health officer Dr. Theresa Tam says there are no plans at the moment to declare monkeypox a public health emergency.

Last month was 6th hottest July on record in 143 years

Last month was the Earth’s sixth-warmest July on record in 143 years, according to the U.S. federal agency that studies oceans, the atmosphere, and coastal areas.

Iqaluit declares state of emergency due to water shortage

The City of Iqaluit has declared a state of emergency due to a water shortage.