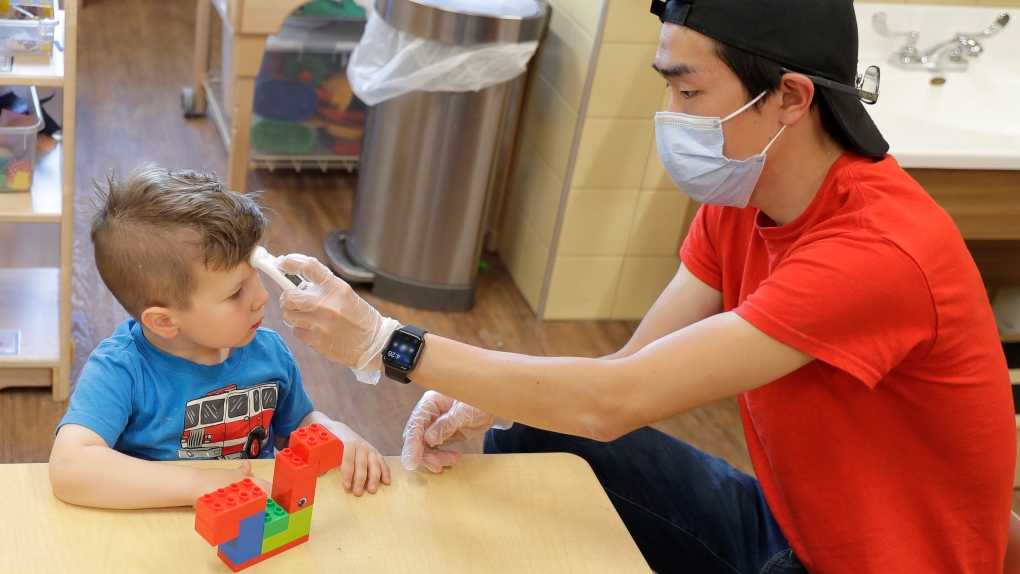 In this May 27, 2020 photo, a teacher at a daycare centre in Tacoma, Wash., wears a mask as he takes the temperature of a four-year-old boy. (AP Photo/Ted S. Warren)

KITCHENER -- A child-care centre in Elmira has temporarily closed its doors after public health officials declared a COVID-19 outbreak there.

The Ontario government's website shows that one case was confirmed in a child at FunCare Learning Centre.

In an email, the company said that the outbreak was in the toddler room, and self-isolation was directed for that room only. The toddler who was infected was last onsite on Sept. 15.

"I made the decision to close the entire child-care centre, not because the preschool children/staff were at heightened risk or our separation of cohorts was ineffective, but mainly due to the fact that as a small centre with many of the staff required to isolate, including myself, there would be a staffing shortage during this period," said Jessica Campbell in an email to CTV Kitchener.

"I also felt that it does not hurt to (err) on the side of caution and have the entire centre undergo a deep environmental clean as an added precaution."

Campbell said the centre is set to reopen at the end of the month on Sept. 30.

This is the second outbreak at a child-care setting in Waterloo Region. Over the weekend, public health officials confirmed an outbreak at YWCA St. Paul Childcare Centre on Birchcliff Ave. in Kitchener.

Officials said that there was one case reported in a child. The centre remained open, but the region said other students in the same cohort were isolating at home.

Persistent fatigue 'significant burden' for more than half of COVID-19 patients: study

COVID-19, flu, cold or seasonal allergies? How to tell the difference between symptoms