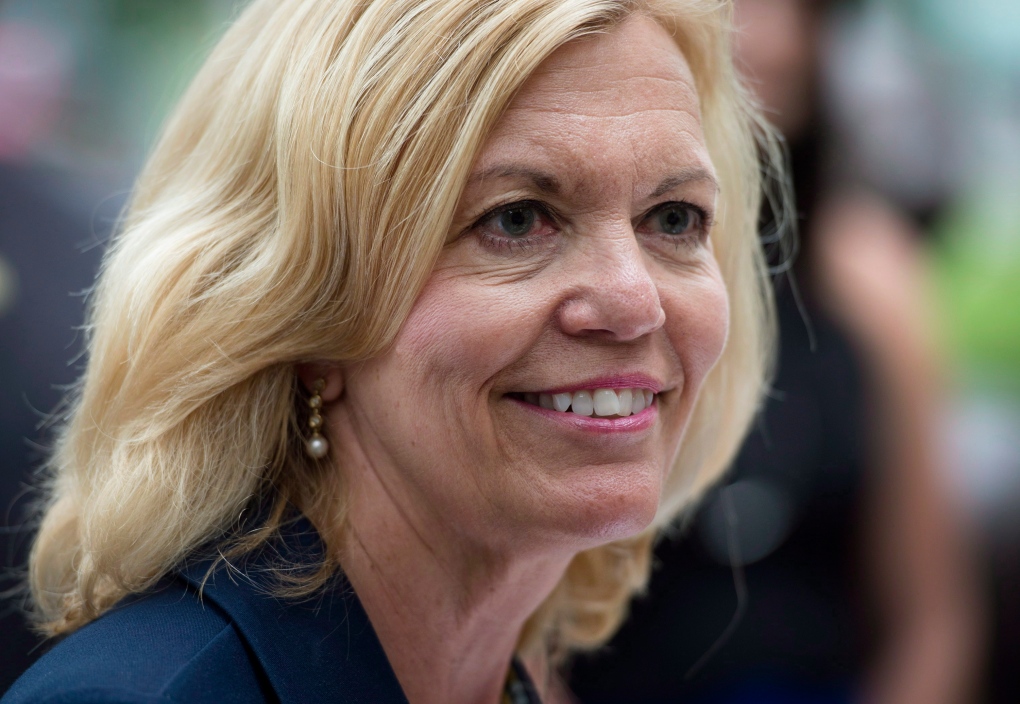 Christine Elliott is shown during a press conference in Toronto on Wednesday, June 25, 2014. (Darren Calabrese /The Canadian Press)

More than 76,000 Tories are eligible to vote Sunday and Thursday, and the winner will be announced at a Toronto event on May 9.

Brown, 36, declared himself the front-runner after selling 41,000 new party memberships -- a requirement for all PC candidates -- compared with 34,000 for Elliott. Calling 60-year-old Elliott "a liberal-lite" candidate, Brown says he would bring a true conservative approach to the job.

Elliott insists Brown's views are outside the Ontario mainstream, and says she's concerned social conservatives would take over the party if he wins the leadership.

PC members will vote in each of the province's 107 ridings, but the results will be weighted to give each riding 100 points, so neither candidate can win by stacking all their support in only a handful of heavily populated ridings.

Both candidates spent much of the campaign criticizing previous PC policies, including former leader Tim Hudak's campaign pledge to cut 100,000 public sector jobs. They both promised to listen to grassroots members, rebuild the party and return it to government in the next election.

Brown is "an untested candidate with nothing more to offer than a life lived as a career politician," Elliott said in early April. "Worse yet, over the course of his time spent in office, he has done little of significance and has no substantive record."

Brown, who was elected to city council at age 22 and then to Parliament at age 27, said it wasn't surprising to see the other camp attack him because he was likely to win the leadership.

Elliott is the candidate of the party establishment and backroom strategists that lost four consecutive elections, said Brown, and won't really bring change if she wins.

The Elliott camp won't admit Brown is leading the race, and claimed Friday that new polling shows she is supported by 58 per cent of PC members compared with only 26 per cent for Brown.

"I'm thrilled that in the days leading up to the vote we've once again confirmed our campaign has the momentum and the strong, committed support needed to win," said Elliott.

Elliott is supported by most of the PC caucus at Queen's Park and counts former premier Bill Davis among her supporters, while Brown has the backing of some party heavyweights, including Postmedia CEO Paul Godfrey and former senator Hugh Segal.