Electric scooters have been given the green light to cruise in Waterloo Region.

As of July 1, e-scooters are allowed on all regional and city roads with a posted speed of 50 km/h or less. The electric vehicles are also permitted in bike lanes regardless of speed limit, on multi-use paths and on select multi-use trails.

E-scooters are not allowed on the sidewalk or on high-speed roads.

“It makes it more convenient, more accessible, for all ages and abilities to leave the car behind,” said Kevan Marshall, the principal planner with the region’s transit services and integration group.

'IT SAVES A LOT OF TIME'

The move towards e-scooters is part of the region’s goal for a more sustainable future and it’s one of the reasons why Yagnik Joshi purchased one. 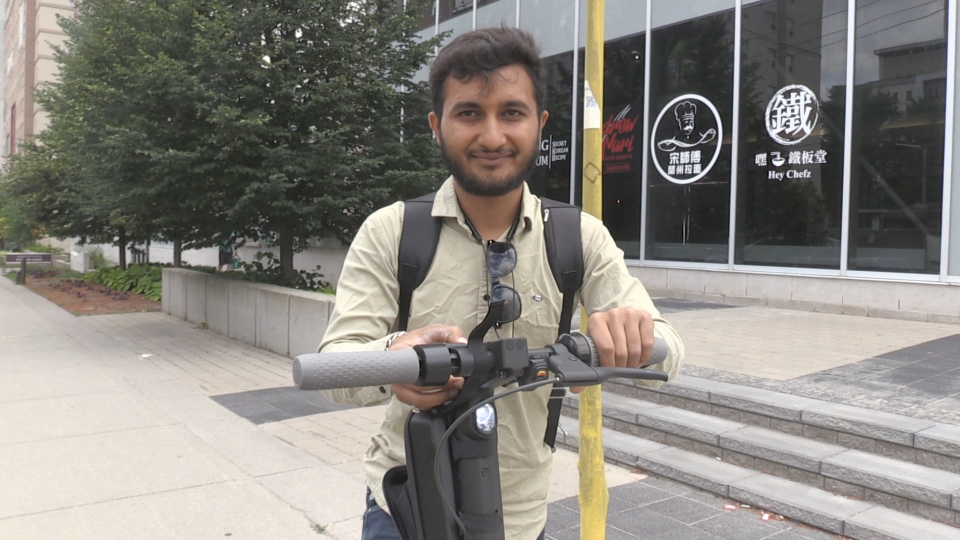 “It saves a lot of time, plus we don’t have to do much physical work with this scooter because when you think of a bicycle, you have to pedal it,” said Joshi, who makes food deliveries in Waterloo Region.

Joshi, a Conestoga College student, said he’s been riding his e-scooter everyday since Friday to make deliveries faster so he can make more money to pay for school.

RULES OF THE ROAD

Marshall said anyone interested in buying an e-scooter should research the rules first.

E-scooter riders must be 16 years of age or older. Also, while the province doesn’t require riders over the age of 18 to wear a helmet, the region has made it mandatory under bylaw.

The electric vehicles also need to have certain specifications, like having a maximum speed of 24 km/h.

Waterloo regional police will enforce these rules under the Highway Traffic Act, though Marshall said the focus is on education.

Nick de Koning, a personal injury lawyer at Deutschmann Law in Kitchener said he has concerns that e-scooters are exempt from insurance requirements and that could leave questions around liability in case of an accident.

“If such a person [on an e-scooter] is responsible for hitting another cyclist or pedestrian, then there’s difficulties on who you pursue,” said de Koning.

Marshall said this e-scooter initiative supports a future bike sharing system that will allow e-scooters to be part of that fleet. It could see 850 e-bikes and 425 e-scooters as early as spring of 2023.

People interested in purchasing their own e-scooter should review the MTO project page to ensure their vehicle meets the provincial vehicle requirements.