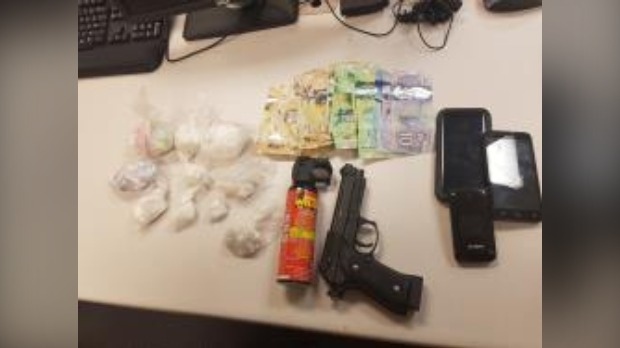 Police seized a number of drugs, some cash and a fake gun after stopping a car in Kitchener. (@WRPSToday / Twitter)

Two people are facing a number of drug and weapons charges after police stopped a vehicle in Kitchener.

Officers stopped the car on Highland Road West on Sunday at around 1:45 a.m.

A search of the vehicle turned up a large quantity of suspected fentanyl, carfentanil, meth, cocaine and prescription medication.

Police say they also seized a replica handgun and a can of bear spray. A photo attached to the release suggests that they also recovered cash.

A Kitchener man, 42, and woman, 38, are facing a number of drug and weapons charges as a result of the stop.

They were not identified.