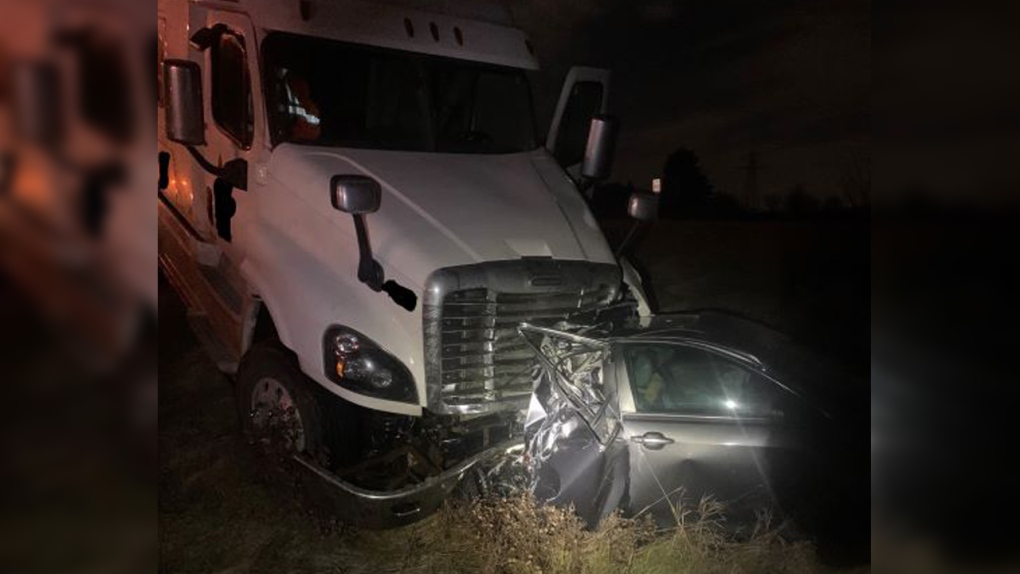 A vehicle underneath a transport truck. Police said two people were seriously hurt in this three-vehicle crash in Guelph. (Source: Wellington County OPP)

KITCHENER -- A Brampton driver is facing a number of charges after allegedly fleeing from the scene of a crash in Guelph that left two people seriously hurt.

According to a news release from the Wellington County OPP, the three-vehicle crash happened at the intersection of Hanlon Parkway and Kortright Road at around 5 p.m. on Sunday.

Officials said that a northbound tractor trailer had reportedly collided into the back of another vehicle, causing a chain-reaction crash. Two occupants in one of the vehicles were taken to hospital with serious but non-life-threatening injuries.

The news release said that the driver of the tractor trailer ran from the scene before being arrested by Guelph police officers. The suspect was then turned over to the OPP.

The accused, 25, was charged with two counts of dangerous operation causing bodily harm and two counts of failing to stop at an accident resulting in bodily harm. Both are criminal charges.

The driver is due in court on Jan. 8 to answer the charges.