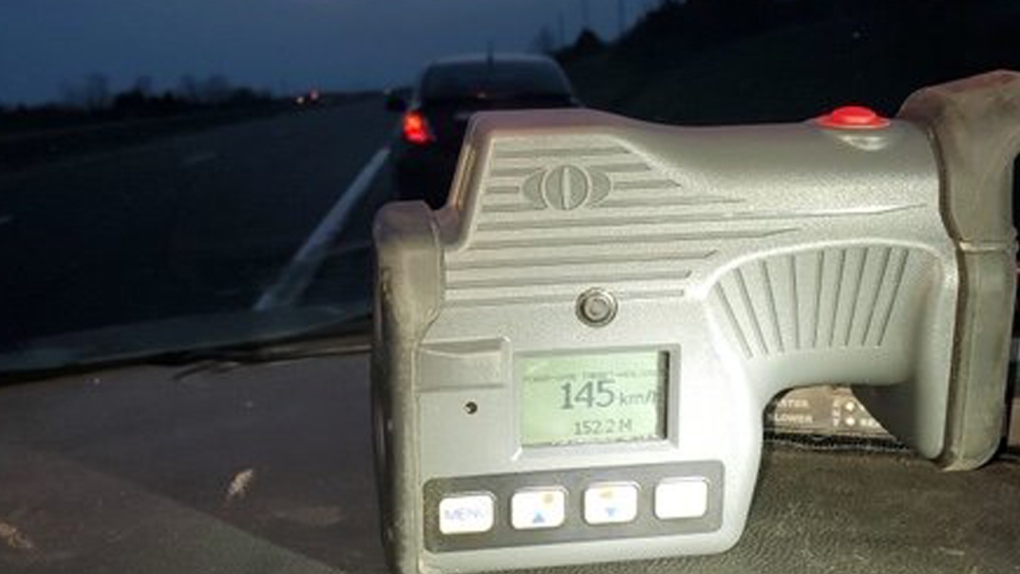 Police say they stopped a driver going 145 km/h on Highway 85 as it passed a police motorcycle. (@WRPS_Traffic / Twitter)

KITCHENER -- Police are seeing more aggressive driving with fewer people on the road because of the COVID-19 pandemic, something police say is "disappointing" to see.

The Waterloo Regional Police Service says they have laid a total of 669 driving charges since April 17.

Officials were anticipating more speeding, but were surprised by how much there has been.

"We expected to see an increase. We weren’t expecting to see the dramatic increase that we have been seeing," says Sgt. Mike Hinsperger.

On Monday, the traffic unit reported that a driver had passed a police motorcycle that was stopped on the side of the road with its lights on going 145 km/h on Highway 85.

That driver also failed to move over for an emergency vehicle, police say.

They've been charged with stunt driving, speeding, careless driving, fail to slow and fail to move over for an emergency vehicle.

Sgt. Hinsperger says stunt driving charges have increased by 721 per cent between April 19 and April 26 compared to the same time last year.

"It’s disappointing to say the least that those individuals are out there and we’re still getting this type of driving behaviour, especially with the safe driving messaging we’ve been putting out," he says.

Police have been working hard to enforce speed limits and safe driving, launching Operation Overpass on April 17 in an effort to curb speeding.

With reporting from Zayn Jinah

Commercial motor vehicle stopped for speeding 130 km/hr. In 100 km/hr. Zone Hwy 401 in Camb. Driver charged for speeding, not having a speed limiter, modified vehicle, failing to conduct inspections, operating after too many hours of duty and failing to maintain log books. pic.twitter.com/AvfZa0kMTp