It’s a sequel of sorts for a downtown Kitchener video rental store, as it gets set to say goodbye for good.

It's the end of an era in Waterloo region, with Far Out Flicks being the last of its kind. But this isn't the first time the store has prepared to pack up.

The Kitchener staple was set to close at the end of 2021, but a new deal with the landlord kept the doors open for its 20th year. But is there a chance this story becomes a trilogy?

He says the finale of Far Out Flicks will come on Jan. 15, 2023, after getting a 15-day reprieve from when his lease is up at the end of this year. In the meantime, he is doing a big screen sendoff by selling the store's extensive video collection. 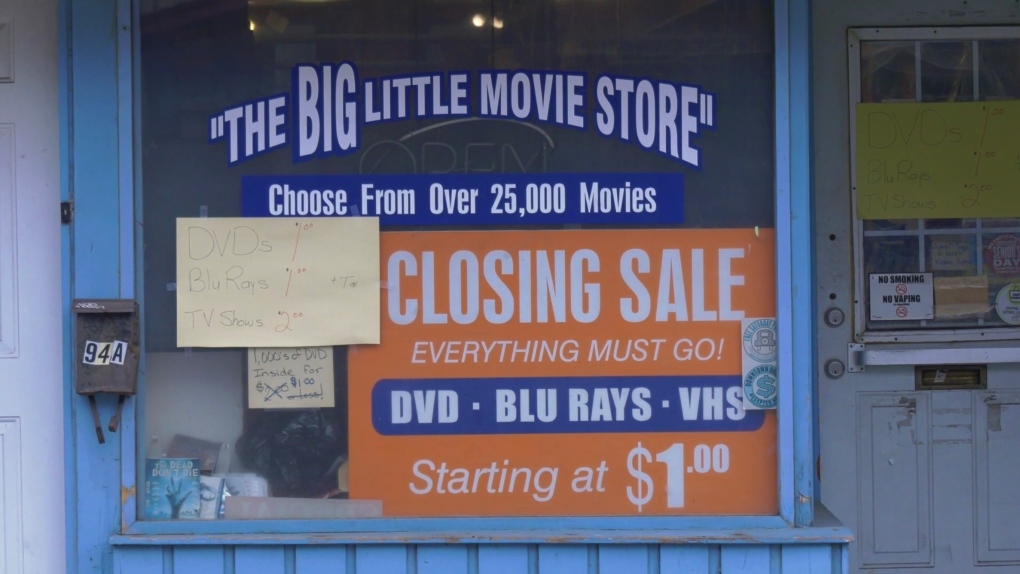 Far Out Flicks will be flicking the lights off in the new year. (Spencer Turcotte/CTV News Kitchener)

When it comes to why Far Out Flicks is flicking the lights off, the high cost of rent is partially to blame. Pair that with the competition of streaming giants, and keeping the screens on becomes nearly impossible.

But Glemser says those services are lacking when it comes to making strong movie recommendations. He says each person on his staff has their favourite genre, and once they know what a customer likes, they can help choose similar movies. He argues streaming services aren't as accurate.

"Amazon said if you like Rango, get Human Centipede 3. I'm not kidding," Glemser said.

Customers say a store like Far Out Flicks is so valuable because they offer films and shows you can watch again and again. With streaming services, that's not always promised.

"If a company decides to revoke the privilege to some show you watch, you might not ever end up watching that show," said Charles, a customer.

Glemser predicts a resurgence of movie stores as early as the next decade. Does that mean Far Out Flicks could be part of that? He didn't say yes, but he also didn't say no.

Still, Far Out Flicks won't completely disappear. Once the store closes, Glemser plans to sell movies over the phone, online and at the St. Jacobs Farmers' Market as soon as the spring.

In the meantime, he offered up some movie-watching advice -- the movie isn't always over when you think it is.

"When the credits are over, watch the rest of the movie," he said, listing off some films where this is the case. "There's still more stuff at the end of the credits."

So even though the credits may be rolling on this part of Glemser's story, keep watching closely because sometimes it's worth sticking around until the very end.

Marc Ouellet, the Quebec cardinal who oversaw the Vatican's powerful bishops' office and has been recently accused of sexual misconduct, is retiring.