Pedestrian taken to hospital after crash near Kitchener intersection

Pedestrian taken to hospital after crash near Kitchener intersection 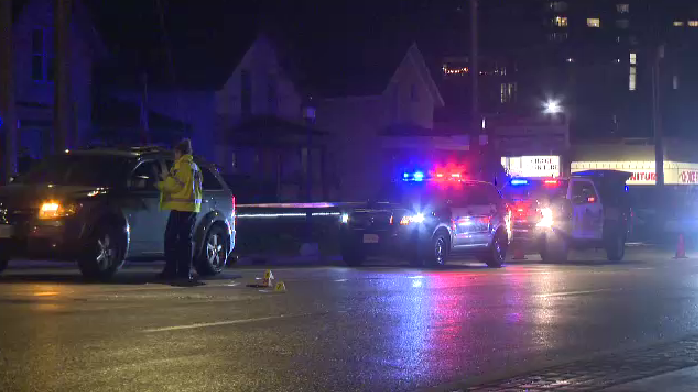 A pedestrian has been taken to an out-of-region hospital after being hit by an SUV near a major Kitchener intersection.

Emergency crews were called to the crash on Victoria Street between Weber and Duke Streets around 7:10 p.m. on Sunday.

The pedestrian was taken to an out-of-region hospital for treatment, while the driver of the SUV was not hurt.

The investigation is ongoing and charges are pending.

After six weeks, more than 70 witnesses, and the submission of more than 7,000 documents into evidence, the public hearing portion of the Public Order Emergency Commission wrapped up on Friday.

Health Canada has issued a recall for an educational children's toy, which may contain above-legal amounts of lead.

Prime Minister Justin Trudeau made an appearance on Friday's episode of "Canada's Drag Race: Canada vs. the World" to offer the contestants words of inspiration before the main challenge.

A new study has confirmed the authenticity of an ancient Roman coin long considered fake but which researchers now believe depicts the image of a forgotten emperor.

Prime Minister Justin Trudeau gambled just by showing up. And he appears to have won in the court of reasonable public opinion, Don Martin writes in an exclusive column for CTVNews.ca.

'What if the worst had happened': Trudeau explains why he invoked Emergencies Act when he did

On the stand at the federal inquiry examining the federal government's invocation of the Emergencies Act, Prime Minister Justin Trudeau revealed candidly that a central factor in his historic decision to enact unprecedented powers to shut down the 'Freedom Convoy' protests, was his fear of what could happen if he didn't.

NASA's Orion capsule entered an orbit stretching tens of thousands of kilometres around the moon Friday, as it neared the halfway mark of its test flight.

A marriage annulment that removed a B.C. woman as a beneficiary from her ex-husband's pension plan has been cancelled after a judge determined an "imposter" had agreed to the terms in court.