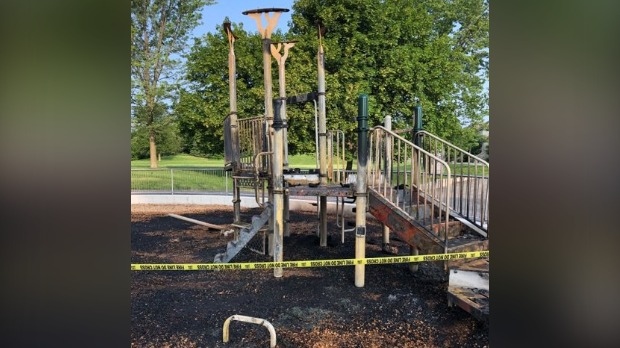 The remains of a play structure at Guelph's Peter Misersky Park. (@cityofguelph / Twitter)

A play structure at a newly-revitalized park in Guelph is no more after a fire on Monday morning.

Fire crews and police answered a call at 35 Mountford Drive at around 2 a.m.

The play structure had been lit on fire. Firefighters were able to put it out, but not before the structure was significantly damaged.

"So it’s disappointing to learn that last night, with construction of the new off-leash dog park set to begin, one of the play structures was destroyed by fire."

The city advises the public to stay off the playground for "the foreseeable future."

A fire at Peter Misersky Park damaged the playground. Please stay off the site for the foreseeable future. Details to come about next steps. pic.twitter.com/EqwOhd8uGp