“We want to make sure that we are amplifying this message beyond just B.C. because I’m worried that she’s not there anymore,” said Nathalie St-Maurice, Jaqueline’s mother.

McDermott was last seen by her vehicle after attending a meditation retreat.

RCMP said her vehicle was found, but she was not in it or near it.

“A little while later, her vehicle appears to be broken down along Highway 97C between Merritt and Logan Lake,” said Cpl. Madonna Saunderson with media relations for RCMP.

St-Maurice said her daughter left in the spring of 2022 with the dream of exploring Canada while living in her van that she outfitted to be like a tiny home.

Her mother said she had plans to meet with friends in the coming days and weeks, but no one has heard from her.

She said it is not like her to cancel on her friends without notice.

In a news release, RCMP described McDermott as a Caucasian female, who is 5-foot-7 and 111 pounds. She has curly blond hair, a fair complexion with a medium build and a pierced nose. 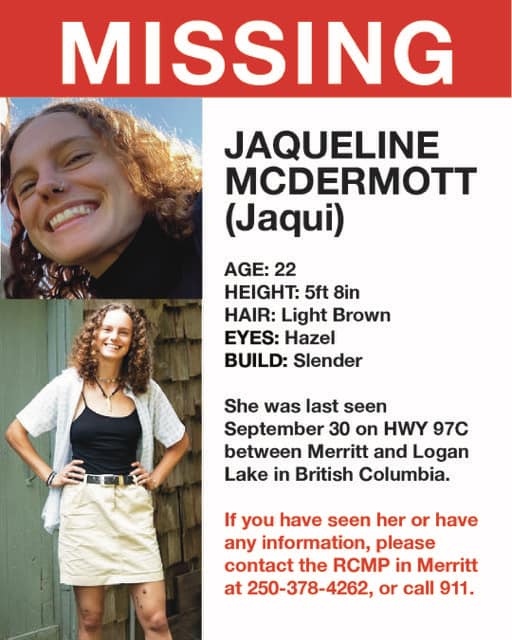 St-Maurice said she hasn’t been able to sleep much since she’s been missing. Her family is having a hard time making sense of it.

“Every time you close your eyes, you go down a rabbit hole that you don’t want to go down,” she said. “Basically disappeared without a trace. It’s unbelievable. It’s crazy.”

Her mother said McDermott is a free spirit and artist.

RCMP said the search will continue.

“The investigation will remain open and active until we find Jaqueline or find out what happened,” said Saunderson.