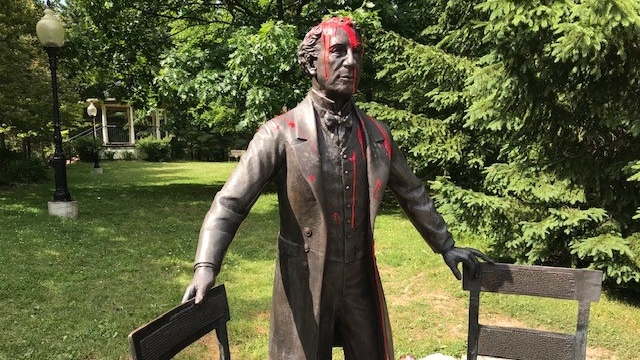 KITCHENER -- One of the leaders of a group calling to tear down Baden's statue of Sir John A. Macdonald said she's "disappointed" by council's decision to hold two closed-door meetings this week.

Wilmot council met on Monday and Tuesday to discuss recent controversies, including Mayor Les Armstrong’s apology for sharing a "White Lives Matter" post, and the red paint doused on the Macdonald statue.

Cheyanne Thorpe, who organized demonstrations in the township, said she believes the meetings should have been open to the public.

"It was definitely discouraging and disheartening to see that certain aspects of this meeting, that topics are being discussed behind closed doors," she said. "But, we are trying to be understanding of council, that they do have to protect certain identifiable individuals."

Thorpe's group held a sit-in at the statue on Saturday and said they plan to gather every Saturday until the statue comes down.

"In the face of hate and inaction, there is a strong and growing local presence dedicated not only to the entire removal of the statue, but to protecting and amplifying the rights and voices of various diverse individuals, and residents of this region and beyond," she said.

After the meeting on Tuesday, council sent out a press release saying the meetings allowed councillors to have a "frank and heartfelt" discussion.

"We hope that these meetings result in commitments to real change that reflect the members of this group and the region at large, and not the values of the Mayor and certain members of council who would clearly prefer we go away," Thorpe said.

An open meeting about the statue's future is scheduled for July 13.