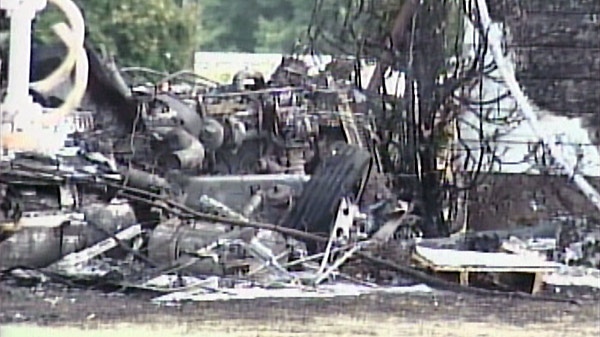 The burned wreckage of a tractor trailer is seen following a crash near Chatham, Ont. on Friday, Aug. 19, 2011.

Two people are dead and three others were sent to hospital after a fiery crash northeast of Chatham on Friday.

Police say a transport truck collided with a car at Longwoods Road and Kent Bridge Road shortly after noon.

The force of the crash sent the transport truck into a nearby house, with both catching fire. No one was in the house at the time.

Firefighters were able to extinguish the blaze quickly.

Four people were in the car at the time of the collision. Two were pronounced dead at the scene and two others were transported to hospital with unknown injuries.

The driver of the truck was also transported to hospital with non life-threatening injuries.

No damage estimate is available yet and police have not released the names of the victims.

The intersection was closed for several hours and the police investigation continues.