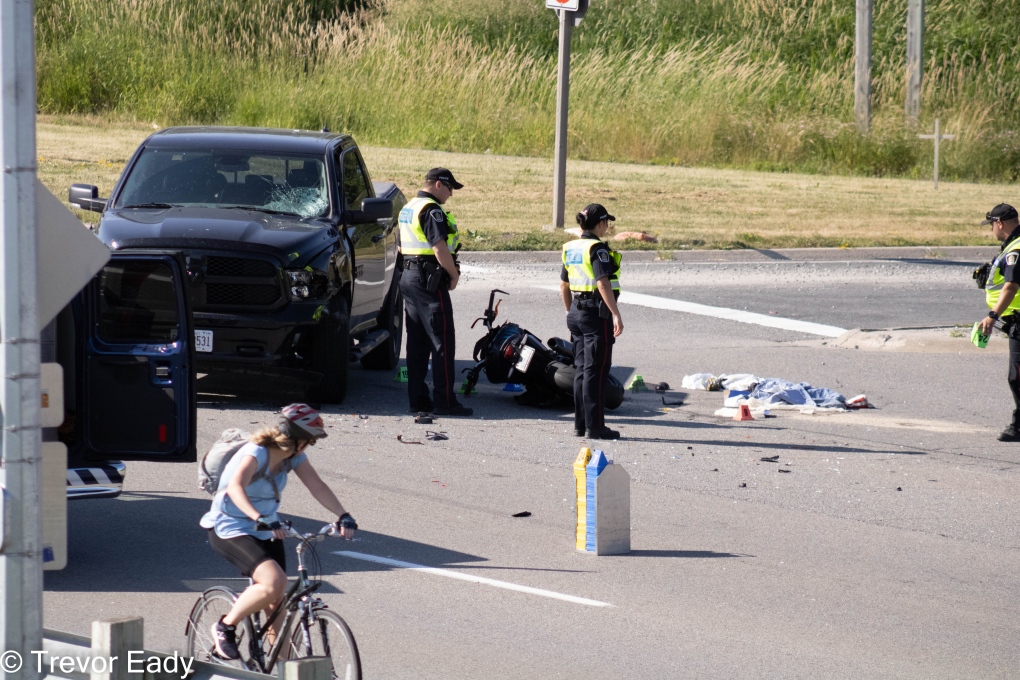 Police are pictured at the scene of a crash on Ira Needles Boulevard on June 28, 2022. (Submitted/Trevor Eady)

Two people have been transported to hospital after a crash on Ira Needles Boulevard in Kitchener.

In a media release, police said the collision happened around 4 p.m. on Tuesday at the off ramp of Highway 7/8.

The 60-year-old man driving the motorcycle was ejected and suffered life-threatening injuries. He was taken by paramedics to an out of region hospital.

The driver of the pickup truck, a 31-year-old woman, was transported to a local hospital by paramedics. Police did not provide information on the severity of her injuries.

Ira Needles was closed for several hours for an investigation into the crash. It has since reopened.

ROAD CLOSURE:
Please avoid the area of Ira Needles between Hwy 7 8 to Highview Dr, as it is closed for a collision investigation.
Thank you
Occ 22-150329 pic.twitter.com/EoADtjpl0Y

Canada's privacy commissioner says the belated disclosure that RCMP has for years been using spyware capable of accessing cell phone and computer microphones, cameras and other data as part of major investigations, is a clear example of why Canada's Privacy Act needs updating.

CRA says it has $1.4 billion in uncashed cheques sitting in its coffers

No damage reported after 4.6 magnitude earthquake off Vancouver Island

A 4.6 magnitude earthquake has struck off the coast of Vancouver Island.

Housing correction in Toronto could end up becoming 'one of the deepest of the past half a century,' RBC warns

A housing correction which has already led to four consecutive months of price declines in the previously overheated Greater Toronto Area market could end up becoming 'one of the deepest of the past half a century,' a new report from RBC warns.

For millennial and gen Z Canadians, owning a home in this real estate market might seem like a pipe dream. In an exclusive column for CTVNews,ca personal finance contributor Christopher Liew offers some strategies to consider if you can’t afford the housing market yet.

Alberta Health Services has issued an enforcement order against a Banff home after an inspection discovered that as many as 42 people were staying inside the property, saying the maximum number of occupants of the facility 'was exceeded.'

Environment Canada has extended heat warnings in a number of provinces, as unseasonably hot conditions continue across the country.

Study connects climate hazards to 58 per cent of infectious diseases

Climate hazards, such as flooding, heat waves and drought have worsened more than half of the hundreds of known infectious diseases in people, including malaria, hantavirus, cholera and even anthrax.