Could this robot be the future of sidewalk clearing? Its makers hope so 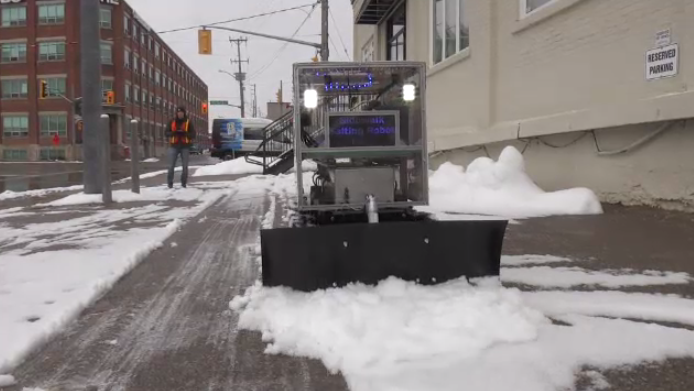 A snowplowing robot takes to the sidewalk in Kitchener on Feb. 13, 2020.

KITCHENER -- A remote controlled robot could one day replace your snow shovel.

Developers working out of Kitchener's Velocity Garage are working on an electric, snow-plowing and salt-brining robot.

The robot walks along the sidewalk at walking speed, taking up only half so that pedestrians can pass them.

The idea was inspired from wanting to remove snow and brine sidewalks in an environmentally-friendly way.

"Also including the ability for sidewalk brining before storms means that less salt water is going to go into the water tables and that we can have that be kept bare as the snow is coming down, as well," explains Technical Developer Tim Lichti.

A remote control operates the robot, but the goal is for it to be semi-autonomous one day.

That means they would be able to operate on their own but they'd always have human eyes on them to ensure they're operating safely.

The robot is in a private pilot testing phase now.

Its developers are hoping to expand the pilot next winter.